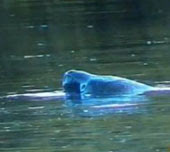 has its very own (kind of, sort of) sea monster, and it's a TV star.

The popular History Channel show MonsterQuest was in town this year to film an episode about a strange being cavorting in the Lake Worth Lagoon. The location wasn't divulged during the show for fear that people would disturb the animal.

But a professor interviewed for the show confirms that those red and white smokestacks seen in some shots are, in fact, the Riviera Beach Florida Power & Light plant, and that the general stomping grounds of the alleged sea monster are waters near . MonsterQuest was lured here by video taken by resident Gene Sowerwine. Film clips of the animal reveal "stunning evidence of a sea beast hunting for prey," according to the show.

A trident-shaped tail slaps mirror-like water in one image; a strange elongated snout breaks the surface to take a quick breath in another. One of the stars of the show, which originally aired in April, is FAU oceanography Professor Ed Petuch.

"What in heaven's name is that," Petuch exclaims playfully when shown images of the beast. "Very interesting, that's very wild." Petuch ends the suspense of the hour long episode with his conclusion that the sea monster could be a wayward arctic seal - extremely rare for these parts but not unheard of. (The trident tail, one expert says, is likely a boat-mangled manatee fluke.) And while Petuch takes the show for what it is - a spot of fun - he said it is also a poignant reminder of environmental conditions.

If the sea monster is a hooded or bearded seal, it points to the possible displacement of such animals by global warming or overfishing."Nature is never constant, by law," Petuch said. "The ice is melting, the surface waters are becoming more fresh water, and it's driving them out of their normal ranges."In 2007, a bearded seal was caught in after leading rescuers on a chase south from Hobe Sound. The year before, two hooded seals were found locally, one in , another 2 miles north of The Breakers hotel in Palm Beach.But Sowerwine, who could not be reached for comment, sounds convinced in his MonsterQuest episode that what he has witnessed is no seal. As eerie music bah-dumps in the background, the lifelong outdoorsman explains: "This is something I've never seen and I believe is totally unknown to science." Martine DeWit, associate research scientist with the Florida Fish and Wildlife Conservation Commission, is a wet blanket on the sea monster. In her estimation, and she also is interviewed on the show, it is simply a manatee .A boat-battered manatee, but a manatee no less. "We know manatees can look like that when they get hit by a propeller," DeWit said. But what about that snout? It appears longer than a manatee's, Petuch says above MonsterQuest music - bah-dump."It appears to move at surprising speed," a voice-over proclaims - bah-dump.One MonsterQuest drawing of the seal/manatee-like beast includes ominous tusks."If this thing does exist like this, it would be one of the greatest discoveries of all time," Petuch says to the camera with a quick smile - bah-dump.

The opinion seems to be is it is a manatee. Not the first time a manatee has been mistaken for a sea serpent or a mermaid. Be interesting to see if anything comes out of this rather sensationalised programme.