Has the Galloway Puma left a paw print?


There  have been big cat  sightings reported since 1950s in the Dumfries and Galloway area of Scotland. The cat was dubbed the Galloway Puma by the press after Canadian tourists claimed to have seen an animal which resembled a cougar near Kirroughtree, south-east of Newton Stewart in the late 1990s. They  saw the animal whilst returning from a  walk in the Galloway Forest. It was also  seen  by locals in Newton Stewart .It was  described by most as black, about the  size of a Labrador dog, with a long tail and yellow eyes. Some have described it as sandy coloured, so is there more than one big cat roaming the countryside in this area?
Many people, such as local farmers and Forestry workers, reported seeing  a big black cat throughout the region. In June 2001, a young woman who was walking her dog near Newton Stewart golf course, was shaken by what she described as a "large black cat, bigger than an Alsatian", springing  out at her on the path .The animal ran away after her dog began barking and growling at it.
There were reports of attacks on livestock:
In one of the 21 attacks in Dumfries and Galloway, a report of injured livestock read: “One sheep was examined by an inspector from the SSPCA who found the injuries to be unusual and not consistent with an attack from a dog. An attack from wild boar or a large cat could be possibilities.”
Source: http://www.deadlinenews.co.uk/2012/04/11/scots-police-deal-with-dozens-of-big-cat-sightings/
Warnings were issued:
BEWARE BIG CATS SAY SCOTS POLICE
By Frank Ryan

POLICE have issued a "steer clear" warning after a series of big cat sightings in south Scotland. There have been four recent reports of an animal described as a lynx, puma or panther in Dumfriesshire. It was seen by two women in Auldgirth, golfers at nearby Thornhill, a man walking his dogs beside the River Nith in the village, and by another man in Sanquhar.
Bob McGoran, deputy head at St Joseph's College, Dumfries, earlier reported seeing an animal like a North American lynx at John-stonebridge, near the M74.
Source:http://www.thefreelibrary.com/BEWARE+BIG+CATS+SAY+SCOTS+POLICE.-a0106200549

The police took the threat seriously.

Another big cat sighting Published on the 14 August 2013
Holidaymakers staying at Kirroughtee Hotel outside Newton Stewart had a close encounter with one of Galloway’s best kept secrets last Saturday morning - an elusive big cat.

Les Gill and his partner Linda were looking out of their bedroom window when they both clearly saw the animal in the hotel grounds. Les said: ”We were standing at the window looking out when we saw it. I lived in Africa so I know what a big cat looks like. It was about four foot long from nose to tail and the tail was long and curled upwards. It was about three foot high and was sandy coloured. It was 60 yards away from us and it was visible for about 25 to 30 seconds.“This was about eight o’ clock in the morning as we were both stunned. My i-phone was in the car or a could have taken a photograph. I just felt I should contact the paper to tell you what we saw as there could be children playing nearby.”In the past four years 20 big cat sightings have been reported to The Galloway Gazette.
Source: http://www.gallowaygazette.co.uk/news/local-headlines/another-big-cat-sighting-1-3045376
In November 2013:
A couple walking in woods near Carronbridge say they came face to face with a mysterious big cat.Craig Johnstone, 27, and his girlfriend Gillian Kennedy, 26, were staying at Trigony House Hotel near Thornhill last weekend.They took their dog for a walk on Sunday morning when they came across a “large, black cat” lying down staring at them.Stunned Craig said: “It was around 50 metres away from us and its head measured approximately one and a half feet from the ground.“It just stared at us for 30 seconds.“Gillian panicked and moved away. I went with her but went back after a few seconds to see if I could get a better picture but it was away.”Craig described the strange creature as being “very stalky, jet black with small rounded ears”.
It continues :Craig and Gillian aren’t the only people to have spotted big cats in the region.Last July, 22-year-old Samantha Garden was on her way to work in Lockerbie when she noticed a strange looking creature standing in the middle of the road near Hoddom Bridge.In January, 2012 Aaron Halliday and Nathan Crosbie spotted a big cat similar to a panther in a field near Dalbeattie.
And in 2011, three mysterious cat sightings were reported in the space of a month. Dan Alexander, of Dumfries, claimed to have seen a creature on the A75 near Newton Stewart.Before that, Dumbarton lorry driver John Spence said he saw two big cats dart in front of his vehicle on the same road near Creetown.And on the same day, Janet Davies spotted an animal near the quarry at Tynron which she called a panther.
According to police, big cat sightings are not uncommon in the area but no creature has ever been traced to verify the claims.
Source:http://www.dailyrecord.co.uk/news/local-news/couple-spot-mysterious-big-cat-2864426

A couple of weeks ago, a person known to me who wishes to remain anonymous, sent me this photo of a large paw print .The person was walking a dog on the Lochinch area  when he came across some footprints and took a snap with a phone. It could be a badger or could it be the Galloway puma? What do you think? 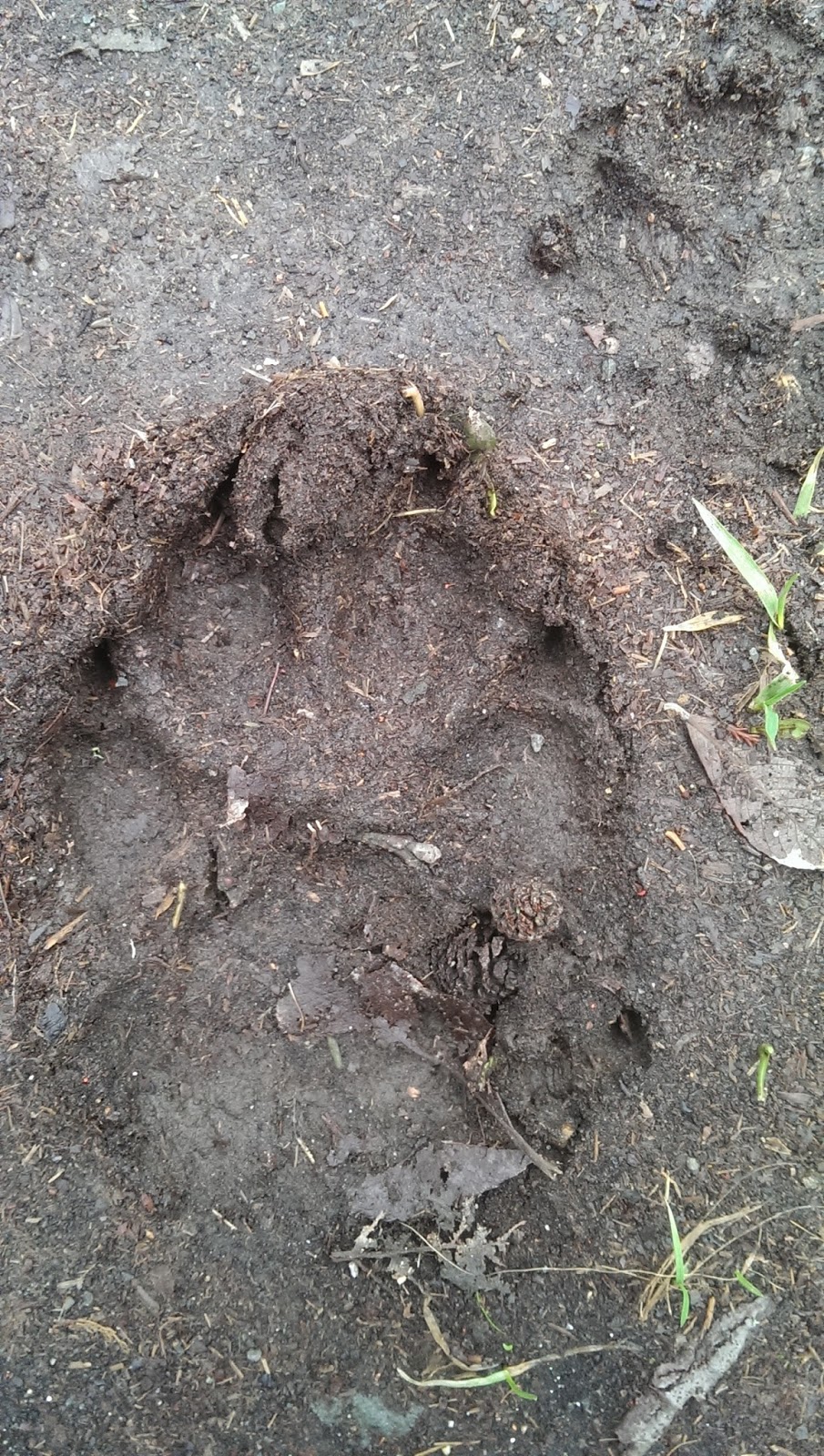 NB. Lochinch is a private estate owned by the Earl of Stairs. At present there are shooting parties on the estate so if anyone wishes to investigate please contact the estate office so you don’t risk getting shot in mistake for game,