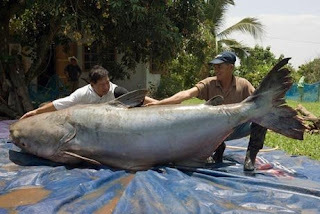 For those who missed this first time around:

A fearsome fish has started killing people after feeding on human corpses, scientists fear.They reckon that a huge type of catfish, called a goonch, may have developed a taste for flesh in an Indian river where bodies are dumped after funerals.Locals have believed for years that a mysterious monster lurks in the water. But they think it has moved on from scavenging to snatching unwary bathers who venture into the Great Kali, which flows along the India-Nepal border.The extraordinary creature has been investigated by biologist Jeremy Wade for a TV documentary to be shown in Britain.“The locals have told me of a theory that this monster has grown extra large on a diet of partially burnt corpses,” Wade said. “It has perhaps got this taste for flesh by feasting on remains of funeral pyres. There will be a few freak individuals that grow bigger than the other ones and if you throw in extra food, they will grow even bigger.”Wade discounted theories that crocodiles could be responsible for the carnage before turning his attention to goonches — among the world’s biggest freshwater fish.He caught one which tipped the scales at 161 lbs and was nearly 6 feet long — a world record weight and far bigger than any landed before.“If that got hold of you, there’d be no getting away,” he said.