There seems to be a history of reported sea monsters and washed up mysterious carcasses around the waters surrounding Russia.

In 1953 Y. Starikov, a former Soviet Navy officer, reported that he and most of his crew had seen a sea serpent in the vicinity of Kunashir, one of the South Kurile Islands. A creature swam past the vessel at a high speed. Then it smoothly dove into the water, without making a splash.

1959 , crewmembers on board the Soviet Navy patrol boat SKR-55 in the Barents Sea under command of Captain A. Lezov repeatedly saw a sea serpent swimming in close proximity of their vessel..

Oct. 26,1994. MURMANSK, Russia - The carcass of a dinosaur-like sea animal has washed ashore after a storm in the Russian arctic, Itar-Tass news agency reported yesterday. Specialists at the Rybichy Meteorological Station near Cape Nemetsky, 1 500 kilometres north of Moscow, said they discovered the remains on Monday. Officials from the Murmansk Marine Biology Institute, although skeptical, are sending a team to examine the animal today. The creature, approximatley 12 metres long and 1.5 metres wide, was covered in either feathers or wool and "outwardly resembled a dinosaur," Tass said. -APWendsday 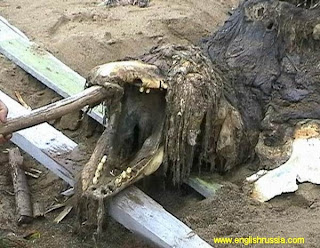 A creature was found by Russian soldiers on Sakhalin shoreline. Sakhalin area is situated near to Japan, it’s the most eastern part of Russia, almost 5000 miles to East from Moscow . According to the bones and teeth - it is not a fish. According to its skeleton - it’s not a crocodile or alligator. It has a skin with hair or fur. It has been said that it was taken by Russian special services for in-depth studies, but people who encountered it first took photos before it was taken away. .22.8.2006 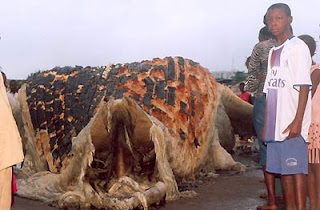 Lake. Labynkyr is a deep lake is believed to shelter a lake monster like Nessie, but smaller and more crocodile like. The lake is situated on the territory of Oimyakon uluss. Legends speak about the monster that lives deep in the water of the legendary lake and attacks dogs, reindeers and even people. Stories say how one day the monster wiped out a caravan of Even ( one of the native peoples in the area)people. There are several documented encounters. The public first learned about the monster in the 1950's from the diaries of soviet geologist named Tverdohlebov. Since then several expeditions have set out to prove or disprove the existence of a monster. It is said that it could be a huge pike, a water mammoth, a reptile or a plesiosaurus, or even something from the parallel world. The expeditions don’t seem to have reported any findings.

So mysterious Russia, has Yeti, sea monsters and lake monsters and even whole mammoths found frozen in Siberia. What I wouldn’t give to have access to reports that are stashed away in secret police archives of sightings of all sorts of mystery beasties. Maybe one day they will be open to public gaze or even online.

Bloody brilliant! Catch a weird thing in the sea, and instead of preserving it and waiting for studies; YOU EAT THE DAMN THING! I hope all the fishermen died from eating it. Idiots

Just saying, that Russian creature is probably most likely a baluga whale