I came across this monster tale from 1999: 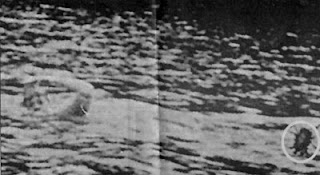 'O'Nessie Makes a Splash', Sunday People, August 22nd 1999
Mystery monster has made an Irish waterway its home!   This is the first picture of 's own 'Lough Ness' monster. The sensational snap was taken by an amateur photographer along a 50-mile stretch of water in the Irish midlands. The creature, said to be more than eight feet long and 300lbs, has been spotted several times on the Lough Erne waterway. The latest sighting occurred last week with swimmers in Co Cavan. Local woman Claudia Westrich was swimming near Killykeen when she felt something pushing her down. She thought it was an oar from a boat accompanying her on the swim but when she looked up the vessel was five metres away. She tried to get a good look at the creature but it dived under the water. But local man Sean Walsh, who was on the nearby boat, mistakingly snapped a picture of the creature before it disappeared. "I was photographing calves on the foreshore. When I developed the film I realised what I had taken," he revealed. Sean (65) took the film and his camera equipment to loocal professional photographer Ray Reilly to check for faults.. Ray confirmed the film had not been tampered with. In a separate incident a group of sea scouts from Dalkey in also reported seeing a creature making a huge splash. Other sightings of the creature have been along the huge waterway in Eniskillen, Co Fermanagh and Belturbet in Co Cavan. Last night Sean, a founding member of Cavan Icebreakers Swimming Club told Sunday People he had no doubt the creature was real. "I don't know what it is but there is something in the water. It has been there for years. "There have been several sightings. People say it is up to eight feet long with a spikey head. It's bizarre," said Sean. Keen swimmer Sean revealed he has had two body contacts with the creature. The first was 25 years ago in almost the same place that Claudia had her eerie encounter. "I could feel it between my legs and swimming around me. It was a strange feeling. "I have never been afraid of it. It only seems to appear when there are swimmers in the water," he said. Chairman of the Cavan Icebreakers, Alex Moran has also reported seeing the creature. Sceptical locals say the creature is a huge catfish or a species of which can grow up to 15 feet and weigh a whopping 600 Ibs. However, visiting English anglers Davy Burgess and Dick Salter of Hayes, Middlesex say they don't think the creature is either. Sean Walsh has his own theory of how the creature came to live and grow in the stretch of water. "Many years ago hundreds of English anglers used to use the Erne Waterway. They brought all sorts of baits with them to catch large pike". "I think the creature is some form of bait from a foreign country which thrived in the area. That's the only explanation I can think of." But now a detective Garda friend of his plans to look into the existence of the creature. The cop is in Cavan speaking with locals and building up a profile on the creature. "We have had a number of incidents which we would like to get to the bottom of. I have no doubt that the creature exists. "People can say what they like but there is too much evidence which suggests there's something there. "We will get to the bottom of it eventually," he vowed.
I have been unable to find any history of creatures in the Lough but perhaps if anyone knows of any folktales or stories about the area they will post a comment. I have also been unable to find any follow up to this so again if anyone knows anything please comment.
Posted by Tabitca at 01:36