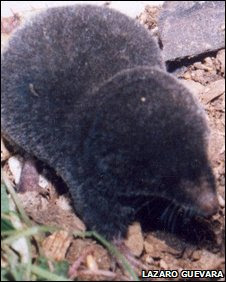 Another animal thought to be extinct is found: .

A tiny species of shrew has been rediscovered in the wild, more than a century after first being described. In 1894, a handful of specimens of the Nelson's small-eared shrew were collected in southern . But the shrew was never seen again, and was considered by many experts to already be extinct. That was until two researchers found three shrews in a small patch of forest, a find that is reported in the journal Mammalian Biology. The Nelson's small-eared shrew (Cryptotis nelsoni) is named after the man who first discovered it. In 1894, Edward Nelson and Edward Goldman collected 12 specimens some 4,800 feet up the slopes of the San Martín Tuxtla volcano in . A year later, the creature was formally described for science, and the specimens were stored away in the drawers of the National Museum of Natural History in . That was the last time the shrew was seen alive for 109 years. The biology of the shrew has remained a mystery. It was even believed to have become extinct because it had gone unrecorded so so long

Cute little thing isn’t it? Who knows what waits to be re-found , perhaps the Con Rit or other crypto zoological beastie?