The Uk's own Mothman? the Owlman.

So does the have it’s own mothman?

Mawnan Smith is a village to the west of Rosemullion Head, near Famouth in . Mawnan Wood is one of the features of the area, and is said to be the haunt of the Owlman , a , half-bird half-human creature.The earliest report I came across was in 1926, when the local newspaper (Cornish Echo) reported two boys had been chased by what was described as a very large, ferocious bird. The boys took cover behind a steel grating, but the bird-like beast continued to try to reach them through the grid.( Jon Downes just informed this was an injured goose so to be discounted)
Then in 1976, two witnesses described an abnormally large bird resembling a giant owl flying over the tower of the 13th-century parish . on April 17th. It was reported that: "During the Easter weekend, the two young daughters of a holidaymaker ... Mr. Don Melling, from Preston, Lancashire ... saw a 'huge great thing with feathers, like a big man with flapping wings', hovering over the church tower at Mawnan (on 'Morgawr's Mile'). The girls ... Vicky, 9, and June, 12 ... were so frightened that t 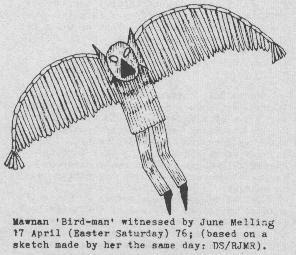 he family holiday was cut short by three days".

Two other young girls on July 3rd also reported seeing the creature.. In the second encounter, 14-year-old Sally Chapman was camping with a friend, Barbara Perry, in woods near the church. According to her account, as she stood outside her tent, she heard a hissing sound and turned to see a figure that looked like an owl as big as a man, with pointed ears and red eyes. Sally described what they had seen: "It was like a big owl with pointed ears, as big as a man. The eyes were red and glowing. At first, I thought that it was someone dressed up, playing a joke, trying to scare us. I laughed at it, we both did, then it went up in the air and we both screamed. When it went up you could see its feet were like pincers"Her friend added some details of her own: "It's true. It was horrible, a nasty owl-face with big ears and big red eyes. It was covered in grey feathers. The claws on its feet were black. It just flew up and disappeared in the trees".

Sightings of this figure continued to be reported on the following day (when it was described as "silvery grey") and on two occasions two years later, in June and August 1978, all within the vicinity of the church

Then in 1995 it was seen again by a female student from visiting the area.". The woman, , described her experience in a letter to a newspaper in "Dear Sir, I am a student of marine biology at the , , on the last day of a summer vacation in . Last Sunday evening I had a most unique and frightening experience in the wooded area near the old church at Mawnan, . I experienced what I can only describe as 'a vision from hell'. The time was fifteen minutes after nine, more or less, and I was walking along a narrow track through the trees. I was halted in my tracks when, about thirty metres ahead, I saw a monstrous man-bird 'thing'. It was the size of a man, with a ghastly face, a wide mouth, glowing eyes and pointed ears. It had huge clawed wings, and was covered in feathers of silver/grey color. (sic). The thing had long bird legs which terminated in large black claws. It saw me and arose, 'floating' towards me. I just screamed then turned and ran for my life."The whole experience was totally irrational and dreamlike (nightmare!). Friends tell me that there is a tradition of a phantom 'owlman' in that district. Now I know why. I have seen the phantom myself. "Please don't publish my real name and address. This could adversely affect my career. Now I have to rethink my 'world view' entirely. Yours, very sincerely scared... 'Eye Witness'."


The Owlman of Mawnan has been compared with 's Mothman because eyewitness accounts indicate similar attributes. Both are described as winged, birdlike humanoids about 4-7 feet tall with a wingspan of about 10 feet with large, red, glowing eyes and live in wooded areas near rural towns

An explanation for the Owlman sightings could be that it was an escaped eagle owl (Bubo bubo), a species that grows to more than two feet high, and has a wingspan of nearly six feet. Other strange activity was also reported at the same time as the 70’s sightings as with Mothman. So mass or media hysteria or mistaken identity? The people appear to genuinely believe they have seen something extraordinary, so the jury is still out on this one.

More on this see :http://www.cfz.org.uk/features/owlman.htm

A recent sighting of a similar nature in in April 2009.