A large worm is hunted 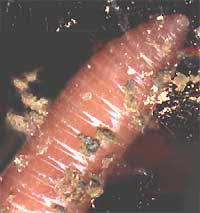 Another large worm is in the news:

MOSCOW, Idaho – The giant Palouse earthworm has taken on mythic qualities in this vast agricultural region that stretches from eastern Washington into the Idaho panhandle — its very name evoking the fictional sandworms from "Dune" or those vicious creatures from the movie "Tremors." The worm is said to secrete a lily-like smell when handled, spit at predators, and live in burrows 15 feet deep. There have been only a handful of sightings. But scientists hope to change that this summer with researchers scouring the Palouse region in hopes of finding more of the giant earthworms. Conservationists also want the Obama administration to protect the worm as an endangered species, even though little research has been done on it. The worm may be elusive, but there's no doubt it exists, said Jodi Johnson-Maynard, a professor who is leading the search for the worm. To prove it, she pulled out a glass tube containing the preserved remains of a fat, milky-white worm. One of Johnson-Maynard's graduate students found this specimen in 2005, and it is the only confirmed example of the species. The worm in the tube is about 6 inches long, well short of the 3 feet that early observers of the worms in the late 1890s described. Documented collections of the species, known locally as GPE, have occurred only in 1978, 1988, 1990 and 2005. The farmers who work the rich soil of the Palouse — 2 million acres of rolling wheat fields near the Idaho-Washington border south of Spokane — also have had little experience with the worm. Gary Budd, who manages a grain elevator in Uniontown, said no farmer he knows has talked about seeing the worm. He compared the creature to Elvis. "He gets spotted once in awhile too," Budd joked. Johnson-Maynard and her team of worm hunters are working this summer at a university research farm and using three different methods to try and find a living worm.

You can read the rest of the story here: