The great orm of Loch Ness?

As I am writing a book about Loch Ness I thought I would re read some of the literature from the 60's and 70's and came across F.W. Holiday's book "The Great Orm of Loch Ness". (1968 Faber & Faber UK). Holiday was an angling journalist who wrote about fishing and published some books on the subject that are still seen as classics today. As a keen fisherman one would have expected him to be aware of the differences in animal life and able to recognise signs etc around water, and so he is a reliable witness. The book chronicles his experiences around the Loch and his own sightings of something large and unusal.

This one is at 6am 1962 "A dozen yards or so into the Loch, opposite the leat, an object made a sudden appearance.It was black and glistening and rounded and it projected about three feet above the surface. Instantly., it plunged under again,violently, and produced an enormous upsurge of water.A huge circular wave raced outwards as if from a diving hippopotamus........Just below the surface ,I then made out a shape.It was thick in the middle and tapered towards the extremities.It was a sort of blackish grey in colour"(p. 13) 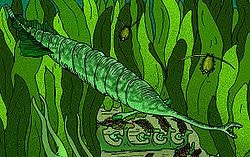 t form of mollusc of the genus "Tullimonstrum gregarium" The tully monster as it is known was a fossil discovered in the 1960's (May be before then but the reports were published in the early 60's) but although the shape matches Holiday.s description , the size of the fossil was only 20cm long .


Holiday never once doubts there is something in the Loch.

It is still a very persuasive book but however like many before him and many since he tries to fit the facts to his theory. In interviewing eye witnesses he asks leading questions such as did the creature appear slimey? Leading the witness to say well it glistened so yes it did. He is so intend on proving his Loch Ness creature as a giant slug, he misses things that may have later proved to be important. I would still recommend the book if you haven't read it. The early investigations of the Loch is fascinating stuff, especially how they tried to find ways to use cameras to cover the loch. The moral of this tale is always keep your mind open to other theories, other wise you may miss something
Posted by Tabitca at 03:03