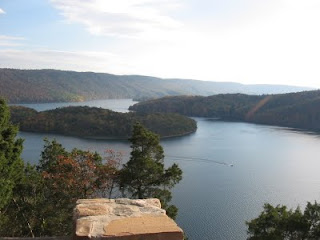 I came across this:(source below)

"I was referred to you by a friend. Can you advise or direct me to someone who can explain what I witnessed?

On August 29, 2009, I was fishing from a boat with my son on It was around 6:45 pm and we were making our way back to the landing. We were near the Snydertown portion of the lake where there is a point of land.As we were heading south, I looked toward the west shore after my son started to point at something. I really have NO idea what this thing was but it looked like a large, thick black snake with a huge head that bobbed in and out of the water. I moved a little bit closer but my son was getting scared, so I cut the motor and looked through my binoculars. The body was moving in coils or humps up and down in the water. The creature had no fins like a fish and the head was diamond shaped. The weirdest feature was that the eyes (which were dark, somewhat small and slanted) were not set on the side of the head...but placed forward. I got an excellent look through the binoculars (I'd say it was about 50 yards from us) when it raised up, it's head moved side to side. It made no sound. I'd say it was at least 20 feet long. I have lived in for only a few years and this is only the second time I have fished this lake. I'm from and have fished many large lakes and rivers but I have never seen anything this big. We watched for about 2-3 minutes until it slipped under the surface. My son's description was very similar to mine but he said he noticed lighter colored 'whiskers' or rays on the chin and face while looking through the binoculars. I had tried to take a photo with my cell phone but it just blended in with the water and was not discernible. My son found an image on the internet that closely resembled what we witnessed (attached). This is nuts! My friends think we saw a large fish or mammal, but there is no way it's either. Please give me some guidance or resources to help identify this. I am skeptical of monsters, ghosts, ufo's, etc. and don't buy into much of what people describe on TV. But, now that I have seen something that I can't explain....let's say I'm confused and frustrated." Thanks...Bill

The blogger whose site this was posted said the man concerned is genuine and believes he saw something strange. Go have a read and see what you think. I was inclined to think Raystown Ray was a hoax but then found ,more sightings, so perhaps something strange does dwell in this man made lake. Fishing anyone?

For the history of raystown ray see my blog here: