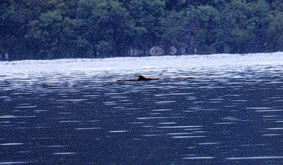 WOOD you have been able to believe your eyes on Loch Ness on Friday? Dozens of Nessie hunters believed they had spotted the monster when this sight emerged. But they found themselves barking up the wrong tree around the loch as experts and cruise and tour operators were inundated with potential sightings of the legendry beast on Friday and Saturday. And even our own photographer Alasdair Allen was among those who thought they had finally come eye to eye with the elusive Nessie herself - and he captured the moment here. But it quickly transpired that the mystery sightings, realistic though they might have seemed at the time, were actually tree trunks that had been washed into the loch during last week's downpours. Loch Ness Project's Adrian Shine, an expert who has been researching the loch since 1973, studied Alasdair's pictures. But he confirmed what we in the office suspected: "There was a flood as there had been a lot of rain at the end of last week. A lot of tree trunks came down from the River Enrick to Urquhart Bay and this is what they looked like."There were monsters everywhere, the loch was full of them!"My colleague John Minshull of Loch Ness Exhibition Centre who runs Deepscan passenger cruises reported it to me. He was running around trying to avoid them."And George Edwards, who runs the Nessie Hunter cruise boat, said he was also flooded with enquiries from excited visitors who thought they might have clapped eyes on the loch's famous resident. He said: "There were lots of people reporting seeing monsters over the weekend. There were logs everywhere."Meanwhile, Alasdair tried to deny he had not been miffed when it came to light his pictures wouldn't be making his fortune. He said: "At around 1.45pm last Friday, I was in Drumnadrochit taking a different picture when I noticed something way out in the loch that looked quite unusual. I took a photo and when I got back to the office and we found it was a log, we had a good laugh."But there was that split second at the time when it looked quite realistic." Source: