Could this be the missing link or Bigfoot's ancestor? 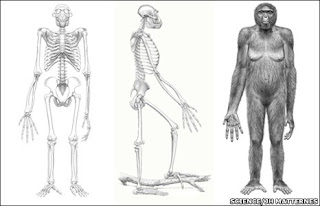 An ancient human-like creature that may be a direct ancestor to our species has been described by researchers. The assessment of the 4.4-million-year-old animal called Ardipithecus ramidus is reported in the journal Science. Even if it is not on the direct line to us, it offers new insights into how we evolved from the common ancestor we share with chimps, the team says. Fossils of A. ramidus were first found in in 1992, but it has taken 17 years to assess their significance. The most important specimen is a partial skeleton of a female nicknamed "Ardi". If Ardipithecus ramidus was not actually the species directly ancestral to us, she must have been closely related to it. The international team has recovered key bones, including the skull with teeth, arms, hands, pelvis, legs, and feet. But the researchers have other fragments that may represent perhaps at least 36 different individuals, including youngsters, males, and females. One of the lead scientists on the project, Professor Tim White from the of , , said the investigation had been painstaking ."It took us many, many years to clean the bones in the National Museum of Ethiopia and then set about to restore this skeleton to its original dimensions and form; and then study it and compare it with all the other fossils that are known from Africa and elsewhere, as well as with the modern age," he told the journal. This is not an ordinary fossil. It's not a chimp. It's not a human. It shows us what we used to be. The fossils come from the Middle Awash study area in the Afar Rift, about 230km northeast of 's capital. Some of the characteristics of the animal's skeleton are said to echo features seen in very ancient apes; others presage traits seen in later, more human-like species. The scientists say 1.2m-high (4ft) Ardi was good at climbing trees but also walked on two feet. However she did not have arched feet like us, indicating that she could not walk or run for long distances. "She has opposable great toes and she has a pelvis that allows her to negotiate tree branches rather well," explained team-member Professor Owen Lovejoy, from . "So half of her life is spent in the trees; she would have nested in trees and occasionally fed in trees, but when she was on the ground she walked upright pretty close to how you and I walk," he told BBC News. Because of its age, Ardipithecus is said to take science closer to the yet-to-be-found last common ancestor with chimps, our close genetic relatives. And because many of Ardipithecus' traits do not appear in modern-day African apes, it suggests this common ancestor may have existed much further back in time than had previously been supposed - perhaps seven or nine million years ago. Comparisons with modern chimp and gorilla anatomy also underline just how much these African apes themselves have evolved since parting company with the line that led eventually to modern humans. One species in particular, Australopithecus afarensis, the famous "Lucy" fossil found in 1974, is very strongly linked into the human story because of its developed walking ability. For Ardipithecus ramidus to also sit on that direct line seemed to require some rapid evolutionary change, commented Professor Chris Stringer from 's Natural History museum. "With Australopithecus starting from four million years ago, one would have thought that things would have moved further down the line by 4.4 million years ago," he told BBC News. "OK, you can have very rapid change, perhaps; or Ardipithecus might be a residual form, a relic of a somewhat older stage of evolution that had carried on. Perhaps we will find something more like Australopithecus at 4.4 million years old somewhere else in . See the full article and more pics here: