The Demon of Dartmoor -hell hound or big cat? 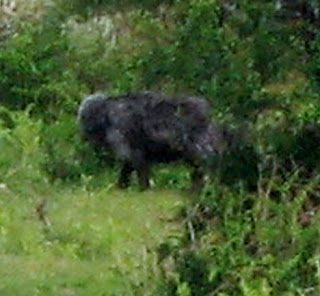 There is a great blog here about the demon:

For those who don’t know the story here is a newspaper article from the time:

Legend has it that a four-legged fiend with glowing eyes and a blood-curdling howl stalks this very spot. Which makes these pictures of a mystery creature taken near Hound Tor on more intriguing than ever. Seen only yards away from a party of schoolchildren, the animal has a thick, shaggy coat, rounded ears and large front limbs which would be powerful enough to tear human flesh. Some say it is a wild dog or cat. More fanciful theories include wolverine or bear. Whatever its identity, the Beast of Dartmoor is giving some farmers sleepless nights because they fear it will prey on their stock. Falconer Martin Whitley, who photographed the creature, said: "It was walking along a path about 200 yards away from me. "It was black and grey and comparable in size to a miniature pony. It had very thick shoulders, a long, thick tail with a blunt end and small round ears. "Its movements appeared feline, then bear-like sprang to mind. There was a party climbing on the tor opposite making a racket but it ignored them completely." A pack of spectral dogs known as the Whist Hounds or Hounds of Hell is said to roam the area according to local folklore, which inspired Sir Arthur Conan Doyle to write the Sherlock Holmes mystery The Hound of the Baskervilles.The author is said to have been inspired by the legend of Squire Richard Cabell, a keen hunter from Brook Manor, Buckfastleigh. The squire was rumoured to have sold his soul to the Devil and after he died on July 5, 1677, a phantom pack of black hunting dogs with glowing red eyes is said to have raced across on the night of his interment, breathing fire and howling at his tomb. According to local legend, the demonic hounds have roamed the moor ever since and can often be seen around the anniversary of his death prowling around the grave trying to get the promised soul for the Devil. The founder of the national research network Big Cats in , Mark Fraser, said: "It looks like a wolverine or a bear in some shots and a big wild dog in others. It is a very strange animal." Mr Whitley is adamant that the creature is not a wild dog. He added: "I have worked with dogs all my life and it was definitely not that. "I have seen a collie-sized black cat in the area about ten years ago and it was not that - this was a lot bigger. "You would be surprised at the number of people who have seen black big cats and something resembling a small bear in the area over the course of the years." Disappointingly for those who possess a vivid imagination, the most likely explanation yesterday was that the Beast is nothing more supernatural than a large and hairy wild boar. farmer Al Dedames lost more than 100 of his stock of boar in December 2005 when animal rights activists raided his farm and destroyed fencing. Since then, more than half are thought to have died in road traffic accidents or been shot by farmers or hunters. But those which survived have bred and up to 175 are said to be roaming the wilds of Devon and .

I feel that the hell hounds are a pack of Russian Caucasian Ovcharka this is the most brutal Russian dog breed. It is a large breed with powerful and muscular body, bear-look face, deeply set oval dark eyes, round-shaped cropped ears and low carried long tail. It has a thick and water resistant double coat in shades of gray and black as well as other colors. The coat may be longer or shorter depending on the region the dog comes from. The average weight of this large dog is 230 pounds but can get up to 300 pounds. This breed is known to be used in hunting of bears and wolves. It has a deep growl that has been said to sound like a large lion growling.