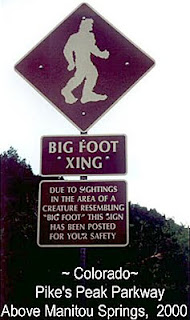 Colorado’s Pikes Peak is said to be a place of bigfoot sightings .The first road to the summit of Pikes Peak was a carriage road opened in the fall of 1888 by the Cascade and Pikes Peak Toll Road Company. The fourteen foot wide gravel wagon road was advertised as " the highest in the world, and a great advance in the field of western transportation". In 2002, the USGS measurement reset the altitude of Pikes Peak to 14,115. I

Is it home to bigfoot? There have been many documented sightings over the years, witnesses describe the creature as being covered in hair or fur, up to 8 feet tall, walking upright on two legs and weighing between 500-800 pounds.

In 1988, a Green Mountain Falls (just west of Pike Peak) resident heard strange a banging on his house at night. When he went out to see what caused the commotion, he found large human-like footprints in the snow, and then saw two large, hairy creatures running down the road. Another local reported that their cat had a scuffle with an unknown creature and there had been a break-in. Fur left on the broken screen door was taken for testing but wasn’t conclusively identified as being from a bear, human, dog or any other known creature.

In 1997, several people reported seeing a Bigfoot just off Highway 24 about six miles west of Manitou Spring (or about 2 miles east of the Pikes Peak Toll Gate).

In 1998, a hunting guide spotted a creature that was seven feet tall, covered in dark fur and walked upright on two legs. After the creature left the area, the guide looked at the tracks left behind and estimated the creature's foot print was 8-10 inches longer than his own size-10 boot.

In June 2001, a family visiting Colorado Springs drove up the Pikes Peak Highway. While posing for a photograph near Crowe Gulch Picnic Area (MM 3), an 11-year-old boy spots a Big Foot-like creature crossing an open stretch of grass. His nine-year-old brother is the only witness. Their father was the one taking the photograph, and had his camera in hand at the time, but did not turn to snap the shot.

However the area has been the butt of hoaxers in the past:

The U.S. Army opened a signal station on the summit of Pikes Peak in 1873, and three men were assigned to be the first to live there year-round. Sgt. Robert Seyboth was one of those men.. One of the first reports by Sgt. Robert Seyboth, telegraphed that on one of his recent climbs he had seen a sea monster in Mystic Lake. He said it was light brown in colour , had small eyes and was at least 100 feet long. The Colorado Springs Gazette reported "Mr. S. describes the creature at about 100 feet in length; its body of a light brown color and covered with large scales. Mr. S. is confident he has not exaggerated the length of the monster."

Then in 1876, Signal Station attendant Private John O’Keefe, told tales of life in the station to lawyer, newspaper man and drinking buddy, Eliphat Price. O’Keefe recounted a story of large, man-eating rats that lived in caves on Pikes Peak. The story then grew to include how these rats attacked him and his wife and daughter in the station itself – devouring a side of beef in less than five minutes. While Private O'Keefe tried to protect his family using a club to fend off the rats, it was actually Mrs. O’Keefe who saved the day by electrocuting the rats with a coil of wire connected to the signal station’s battery. According to the story though, her efforts were too late. Before she could connect the wire to the battery terminals, hundreds of these killer rats had already devoured Erin, the O’Keefe’s only daughter. O’Keefe erected a grave on the summit to support his story .However O’Keefe wasn’t married and he didn’t have a daughter. Despite these obvious clues, the story hit the wires and ended up being published in many newspapers around the globe.

So if the bigfoot does live on the peak he will have a hard time proving it with all the hoaxes that have gone on!