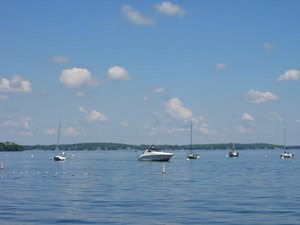 is in and is 82 feet deep .It is said to be the home of a lake monster which also has been reported in the neighbouring .
Sightings began in the 1860s, by a and his wife who were boating near Governor's Island on .. The couple were in a small boat when, they came across what appeared to be a log or piece of driftwood. When Park raised his oar to tap the log, the water suddenly boiled up and the "log" dove under the water.
"That this was a monster of some sort, we have no doubt," wrote Park. "And we were not too long in deciding that retreat was the better part of valor and we resolved to say nothing about the matter." He and his wife came forward in 1892 after other reports.

This report on Oct. 17 in 1892, by a group of 12 young men who said saw a 35-foot-long creature in the lake, prompted Park to come forward. The same year a young man reported encountering the creature in the , which links Mendota and Monona lakes. He said it looked like a log, except that it swam and dove and it had tried to overturn his boat.
On Aug. 22, 1899, Barney Reynolds reported seeing a creature in the lake near the landing for the Bernard Boat Yard.

In 1917, a man fishing for perch off Picnic Point saw "a large snake-like head, with large jaws and blazing eyes, emerge from the deep water not more than 100 feet away." The man was paralyzed with fear at first but then ran away, leaving his pole and catch basket behind.

There appear to have been no recent sightings but then I found this:

In 1917, a of student walking on the north Point found a large, thick object that resembled a fish scale. He could not identify it, nor could a UW professor who examined it. It was described as an unusual scale, "of large size, thick and very tough," The State Historical Society records that one anonymous professor, originally from , believed the scale belonged to a "sea serpent."
Then this was found:
According to the society, dredging on the same lake in the 1890s revealed some "huge vertebrae" belonging to a long-dead, unknown creature. Unfortunately I was unable to uncover any more information on this.

Older native legends make reference to "wak tcexi", long-tailed beasts that supposedly lived off the eastern shore of the lake. It should also be noted that in , they have captured sturgeons that were twenty five feet in length.

Just yesterday, Friday July 16, 2011 my two cousins and me went fishing there. Where the private property, but acrossed it by the railroad on top of the rocks. We was fishing from like 6 in the morning til like 2. At 1-ish I saw this tail floating, I didnt wear my contacts so it looked weird, but it looks like a tail. But it was too weird.. the color of the tail was blue with some white and some pink-ish. I told my cousin "look at that mermaid" lol. He looked and said "wtf?" He told me to throw in my bait and try to hook it cause it looks dead and the tail was just floating. i had a jig with a rubber minnow. I hooked it a little and got scared. But i can see it moved a little. I was like holy shit, it just moved. My cousin threw my bait in and let it sink deeper and that thing bite! When he tried to pulled it, we can see the pole bent like it was going to break. Then it got unhooked and the hook flew all the way up, passed us, and back down, then we railed it back in. A boat came from the left side of the railroad and passed the railroad bridge. We was on the right side on top of the rocks. The "Fish" went under the boat and we can see just the back and the tail and I'm sure just that part was like 5 foot. It was not anything I've ever seen before. You can tell that the tail was clearly blue, but it also had some pinkish and white and some other color.. And it just disappeared after the boat passed. We never saw the face of that "Fish" but saw the tail. It was such at weird experiment.

In the 1980's around 1983 we saw what we called a monster on Lake Mendota from the 3rd floor hall window of the Alpha Delta Phi fraternity at 640 N. Henry St. We did not see the body, only the head which appeared to be about 3 feet in length. The monster was about 100 yards off the shore at the time. The head on the monster surface mover a little then submerged and resurfaced 30 or so feet away from the original spot. A couple of folks saw it that day. Unfortunately I by the time I got my camera it was gone. I've always assumed that it was a giant sturgeon but who knows?