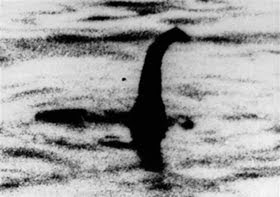 A LOCH Ness Monster theory which suggests the creature is a living dinosaur has been dealt a blow by scientists. Many believe that Nessie is a plesiosaur, a long-necked marine reptile which sought refuge in 's second-largest freshwater loch when most of the species died out 160 million years ago. But Dr Leslie Noe, a palaeontologist at 's , discovered that the plesiosaur would have been unable to lift its head up, swan-like, out of the water. Most scientists believe the creatures became extinct with the other dinosaurs, but some insist it is possible that after the last Ice Age, some plesiosaurs may have been stranded in the 23-mile-long loch, which was connected to the sea. The plesiosaur has a prominent small head on a long neck and a round body, and is the most popular explanation for mythical Nessie.

Dr Noe, whose findings are reported in this month's New Scientist, told experts at a meeting of the Society of Vertebrate Palaeontology in , that plesiosaurs used their long necks to reach down and feed on soft-bodied animals living on the sea floor. By examining fossils of a plesiosaur, Muraenosaurus, and by calculating the articulation of the neck bones, Dr Noe concluded the neck was flexible and could move most easily when pointing down. Dr Noe said: "The neck was a feeding tube, collecting soft-bodied prey. The osteology of the neck makes it certain the plesiosaur could not lift its head up, swan-like, out of the water." However, the findings did not surprise George Edwards, one of the world's foremost authorities on the monster, who took a photograph of a unknown "creature" with a black hump he spotted on the loch in June 1986.Mr Edwards, from Drumnadrochit, who runs Loch Ness cruises on his boat, the Nessie Hunter, said: "Most people don't support the dinosaur theory. The creature is some entirely new species. When you consider that every year in the open seas thousands of new species are discovered, this is the most likely explanation. But there's no doubt that a creature, one with a single hump, which most people report, does exist." THE earliest reference to Nessie was in the life story of St Columba who, in August 565, apparently fought off a monster from Loch Ness that was attacking a Pict. The first modern sighting was on 2 May, 1933, when the Inverness Courier reported a couple seeing "an enormous animal rolling and plunging on the surface". The newspapers sent reporters to and a circus offered a £20,000 reward for the capture of the monster.source:

If the surgeons photo is a fake and Nessie does not stick it's head out of the water in this fashion then it could still be a plesiosaur. However It is unlikely . I know most science is guesswork and we all set out to prove our theories are right and then someone comes along and tries to prove the theory wrong...thats how it works in academic life... but I feel this scientist may be right . The neck of an elasmosaurus is ridiculously long and would be difficult to hold upright. I would love nessie and other lake monsters to be living dinosaurs but sadly it is unlikely and more likely that they are either an unknown creature or a giant eel or huge fish. Still would be exciting to find the answer though.......anyone got a large fishing net they are not using?