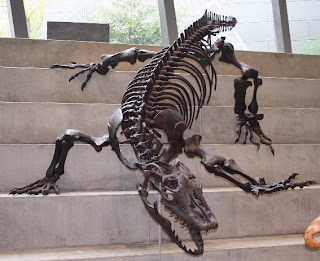 Could giant monitor lizards exist in Australia? A gigantic monitor lived in Australia in the past, the creature, whose remains date from the Quaternary Period, was christened Megalania priscus, and it attained lengths of up to 25 feet. Could the giant monitors that people claim to have sighted be surviving specimens of Megalania?

Aboriginal tribes of Australia believe in the existence of giant-sized goannas or Lizards which they called "Bungarra". They told early settlers that these creatures reached lengths of up to 30 feet, and that they should always be wary of them. In the 1800’s the tribes of the North West Cape region were said to live in fear of these giant lizards, claiming that a number of the creatures lived in the bush in the area.

There was a case reported in 1890, that a huge 30 foot lizard was causing terror among the villagers of a village called Euroa, in Victoria. It left behind large footprints and was described as monstrous by those who said they had seen it roaming around in the bush. A search party of forty men set out, armed with nets and guns accompanied by dogs, to search the surrounding bush in an attempt to capture the creature .They found nothing however and it was not seem again.

Then there was a sighting of a giant lizard or dinosaur that was said to have occurred near Mount Isa, in Australia in 1961. A dust storm forced a group of hunters, including a man called Tom Geoghan, to take shelter. In the distance across flat terrain, a huge bipedal reptile crossed in front of them. Once the storm past, the men immediately left the area.

Then in 1975, two farmers stopped their car along a road in the Wattagan Mountains to move a log which was lying in their path. As they tried to move it, it moved itself and they said it was a giant monitor. The next reported sighting of a creature was in December 1975 when a farmer at Cessnock (in New South Wales), reported seeing a monitor lizard nearly 30 feet long. The creature had a two-foot neck, a three-foot head, and stood nearly three feet tall.

Yet another sighting comes from 1979, when Australian herpetologist Frank Gordon, searching for skinks in the Wattagan Mountains, said he had come across a large monitor 27-30 feet in length.

On 28th April 1982, Mr Walter Lake was driving his Land-Rover toward Karratha on a dirt road near the Nickol River and was forced to brake when a large monitor lizard with mottle-coloured skin dashed across the road in front of him. In the few seconds he got to look at the animal, he said he could see that its entire length covered the road. That would make it about 22 feet from head to tail

Similar stories have come from the Kimberley region in Northern Australia. One such report, was that a stockman who was mustering cattle in the Margaret River area in 1981 spotted a monitor of greyish appearance, about 20 feet in length, moving through tall grass . The stockman fired a couple of rounds at the creature which turned and bounded off on its four legs into a thick scrubby area nearby.

In April 1983, some walkers discovered fresh giant-sized tracks, identified as those of some large monitor lizard, deep in the Mungaroona Range to the east of Roebourne.

The In June 1986, campers on the Ashburton River in the vicinity of Mt Alexander, to the east of North West Cape, came across fresh, large lizard tracks and tail-marks on river-bank mud. It was estimated that the reptile which made them reached a length of between 10 and 15 feet.

So could the giant monitor still be around? Well we have the Komodo dragon still with us, so it is a possibility. Certainly far more possible than any other dinosaur.

Can I ask what source you got the 1961 sighting from? I cannot find any other mention of such a sighting on the net, so I assume you got it from a "hard" source.

It is the article linked at the bottom if I remember correctly. thanks for your interest

Rex Gilroy would be the best person to talk to. He's the accepted authority on these giant lizards. He has a website, mysterious Australia. He's easy to find through a Google search also.

Checked out his websight and unfortunately he appears to only have old info found tracks of this animal very easy to come by and yesterday i even met someone else who saw this lizard in almost the same spot but he was unwilling to help look for it again as he's scared to death of it if anyone out there has had the same experience and are willing to help let me know, but i must add im trying to avoid people who might want to harm the animal and need to know they have seen it in the same place as me if before i take anyone there