out of place animal? 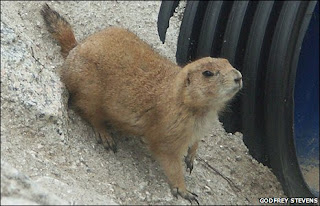 Well I know the climate is changing but didn’t think it was that warm:

A couple from have photographed a prairie dog while they were on a moor in . Linda and Godfrey Stevens were on the Goss Moor trail when they spotted a small furry creature that they could not recognise. Godfrey Stevens said: "We didn't expect to see anything like that." Newquay Zoo confirmed the picture was that of a prairie dog. They are mammals from the squirrel family and are from the grasslands of . Mr Stevens said: "We expected to see wild flowers. It was a real surprise for us." John Meeks from Newquay Zoo said it was a black-tailed prairie dog "without a doubt".

Wildlife is showing up all over the place, were they aren't native to. Good article. :)

I wonder what effect they will have on the local ecosystem if it is a breeding pair? Cute animal though .