Sonar readings in Loch Ness, could it be the monster? 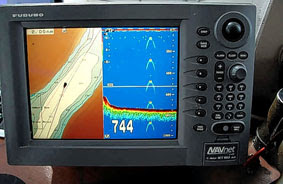 There has been a history of sonar readings of what is said to be a large object in Loch Ness since 1954. In view of the latest one I thought I would take a look at some of the main sonar investigation.

In 1954, a Loch Ness fishing boat equipped with sonar recorded a large object travelling at about the boat's speed at a depth of almost 500 feet.

The late 1960s there were a lot of sonar and other projects taking place around Loch Ness. Some came back with sonar readings that evidenced an object about twenty feet long, moving swiftly and not thought to be a fish.

In 1968 April Birmingham University, academics Prof D Gordon Tucker, Dr Hugh Braithwaite, Dr D J Creasy and their team used Digital Sonar at a Frequency of 50kHz,It was a fixed sonar screen, shore-based and showed some positive results for something large in the loch. In August of the same year the same team returned with the same equipment and got similar results. However in 1969 the same team tried again and found nothing.

But also in 1969 during June to August ,R W Eastaugh and team from Vickers
using a different Frequency of 155kHz on board a Pisces submarine found
positive results.

Then in September and October 1969 The World Book Encyclopaedia sponsored another sonar sweep. On frequency 100kHz from a boat on the surface . Once again they said they had a significant result. They returned in 1970 from August to November with equipment on the same frequency as before and the same boat, and again reported positive results for a large something in the loch.

In 1970, underwater microphones picked up a series of chirpings and swishing noises scientists could not identify. The recordings seemed to suggest a large animal using echolocation to find prey.

Then In September 1970 and August 1972, Investigators from the Academy of Applied Science, Robert Rines, Martin Klein and their team ran several sonar sweeps. They included a sonar towed from surface craft across the loch and a fixed mode from the surface. They reported significant Results.

In 1987, Operation Deep Scan was launched. It used 20 boats and submarines fitted with sonar equipment. The idea was to scan the whole loch with 'a curtain of sound', such that nothing could go undetected. Once again, some large, unexplained, underwater targets were found.

In 2001 An expedition by the Global Underwater Search Team (GUST) was conducted with advanced sonar equipment to search for the creature. One night a sonar contact was seen moving on the screen. On another occasion, a vague disturbance was captured on film.

That brings us up to the present day and the recent sonar reading. Publicity stunt? Who knows but it is not the first time Nessie has been said to have be found on sonar.