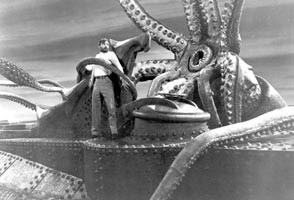 There have been a few stories of submarines coming across sea monsters so I thought I would take a look at the two most reported ones.

On July 30, 1915 when the captain of the German submarine U-28 torpedoed a British ship near Fast Rock off of Ireland, the British vessel sank. As the ship went down, an explosion occurred underwater and the German captain reported that a monster was thrown up out of the sea. The 60 foot long, crocodile-shaped beast then fell back into the waters and sank. It was seen by the captain and some of the crew.

There is a history of sea monsters in the area in folklore .The Vikings and Norsemen from Scandinavia arrived by longboat to plunder and in 1014AD most of the Norsemen were defeated at the Battle of Clontarf .During and after the battle it was told that the legendary sea monster, which can be seen on the O'Kelly crest , came from the sea to protect the body of Tadgh Mor and his kinsmen.

Could the sea monster the U boat saw be a mausosaur ? A giant crocodile type prehistoric creature. Unlikely although it may have been a large saltwater crocodile, though what it was doing in those waters is open to conjecture. I could find no official record of the incident ,so it may be hearsay , but interesting all the same.

The next account says that on April 30, 1918,at the end of WW I, the crew of the British patrol boat, the Coreopsis were sailing off the Belfast Lough and were surprised to come across a German U-85 submarine just floating on the surface of sea. The crew members were a bit put out as they were not used to coming across U-boats on the open seas, especially ones that did not fire at them or sink below the water. The entire crew of the U-85 asked to abandon ship, and once safely aboard the British vessel, the U-boat's commander, Captain Gunther Krech, was questioned. One of the first questions asked was why he chose to remain on the surface when their obviously British vessel came within his line of sight. Captain Krech's response was not one that anyone expected.
According to Captain Krech, his submarine had surfaced during the previous night in order to recharge its batteries. Krech was on deck with some men and a few of his officers, when there was an abrupt surge of water off the starboard bow. The captain described a "strange Beast" that climbed out of the dark ocean and onto the side of his ship. Krech described the creature to the British Officers as:
"This beast had large eyes, set in a horny sort of skull. It had a small head, but with teeth that could be seen glistening in the moonlight. Every man on watch began firing a sidearm at the beast, but the animal had hold of the forward gun mount and refused to let go."

Krech continued his story, stating that this creature was so large that the U-boat to list greatly to the starboard side. The captain, fearing that the open hatch would drop below the waterline (which would flood the sub and eventually sink it), ordered his men to continue their attack on this beast. The battle raged until the animal finally released the submarine and slipped back into its watery domain. The crew of the U-85 were shaken, but glad to be alive. The Captain said that during the struggle the forward deck plating had been damaged and the U-boat could no longer submerge. "That is why you were able to catch us on the surface," the Captain concluded. Krech and his crew's account was chronicled by members of the British Navy, apparently hours after the events took place. The official record of the event reads as follows in the reports:

Again no official mention of the sea monster. There are reasons for that during war time, when the powers that be would not want people alarmed, nor sailors reluctant to put to sea. It could have been the British crew did not want to be ridiculed or simply did not believe the story. The description sounds like a plesiosaur. Could it have been a large seal that the men mistook in the dark?

Both stories are intriguing with little evidence to back them up but then aren’t all cryptozoological accounts the same? A couple of stories to ponder over on a Monday morning.