Pterodactyls sightings in the 1800’s, hoax or not? 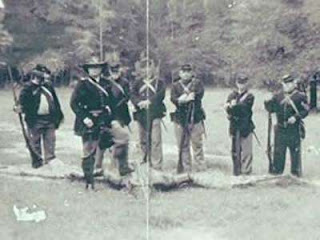 There has often been reported sightings of Pterodacyls in the 1800’s so I thought I would take a look at the evidence.

First there is this:

Pterodactyl sightings were reported here in the 1880s, around the Castaic and Rabbit (Elizabeth today) Lake. Many prominent citizens reportedly witnessed the huge creature with leather-like wings, giant eyes and skunk-like stink to it. It would dive into the lake and come out with fish. Or, fishermen…John Boston

Folklore says that a monster lived in the lake and said that the Devil himself created the lake and kept one of his pets in it. The stories go as far back as the 1830s when Don Pedro Carrillo abandoned a ranch on the lakeshore after a mysterious fire. He complained of the La Laguna del Diablo. In the 1850’s, Americans settlers claimed the area was haunted. Then, Don Chico Lopez and two other men claimed to witness the ascension of a huge monster with bat-like wings from the lake. Lopez also left his lakeside ranch, claiming that his livestock were disappearing. Rancher Miguel Leonis, who later acquired the lands, also claimed to sight a griffin-like creature over the lake. In 1886, yet another rancher, Don Felipe Rivera, claimed to see a beast over the lake. There have been no sightings reported since the 1880s.

So did the creature die out?

Then there is the story that two cowboys sighted an enormous flying creature in in the Arizona desert in April 1890. The beast had the body of a serpent, immense wings, two clawed feet and the face of an alligator. The men the bird on foot. It took off and landed a few times and the cowboys opened fire with rifles and killed the creature. The of this flying creature was said to have been 160 feet and the body was more than 92 feet long. It was smooth and featherless, more like a bat than a bird, and they cut off a piece of the wing and brought it with them into Tombstone, Arizona. That is the story that was told in an April 1892 issue of the Tombstone newspaper, the Epitaph. It has become a modern legend, or urban myth if you like. The story has been retold since for example in 1930 in the book On the Old West Coast by Horace Bell .Then a writer named Jack Pearl mentioned the story in a magazine called Saga, in the early 1960’s, from what I could ascertain. He not only told the story but also claimed that the Tombstone Epitaph had, in 1886, ( note the diffrence in dates between 1892 and 1886)“published a photograph of a huge bird nailed to a wall. The newspaper said that it had been shot by two prospectors and hauled into town by wagon. Lined up in front of the bird were six grown men with their arms outstretched, fingertip to fingertip. The creature measured about 36 feet from wingtip to wingtip.”The story continued when in September 1963 in an issue of Fate magazine, a writer named H.M Cranmer wrote that the story was true, and the photo had been published and he had seen it in a newspaper, as had others. He would not be the only one who remembered the photo. Researcher and cryptozoologist Ivan T. Sanderson also remembered seeing the photo and in fact, even claimed to have once had a photocopy of it that he loaned to two associates, who lost it. The Epitaph however stated that no photo existed, or if it did, it had not been in their newspaper. More recently, in the late 1990’s, author John Keel said that “I know I saw it! And not only that - I compared notes with a lot of other people who saw it.” Keel believed that he had seen it in one of the men’s magazines (like Saga or True) that were so popular in the 1960’s. Still no photo was found.

Then in the late 1990s, the photo you see at the top of this article appeared on the Internet. Many wondered if it was related to the long-lost photo in any way. As it turns out, however, it was created by Haxan Productions for their "Freaky Links" television show for advertising. So was the original photo a hoax or did it exist? Many people believed it did and that the story was true. There is no way of knowing. My inclination is that it was a hoax but there may have been some truth in the story and the cowboys may have captured and killed some sort of large bat.

Then the story moved to Europe :.

It was reported in an article in The Illustrated London News (February 9, 1856, page 166) that, in 1856, workmen labouring in a tunnel for a railway line, between Saint-Dizier and Nancy, in France, were cutting through Jurassic limestone when a large creature stumbled out from inside it. It fluttered its wings, made a croaking noise and dropped dead. According to the workers, the creature had a 10-foot (3.0 m) wingspan, four legs joined by a membrane, black leathery skin, talons for feet and a toothed mouth. A local student of paleontology identified the animal as a pterodactyl. The report had the animal turn to dust, as soon as it had died. This was a hoax and yet took in many people. The creature apparently leaving no trace and turning to dust would have been a clue to most people.. The tunnel in question was through limestone of similar age to the Solnhofen Limestone, so it presented an opportunity for a great hoax. see a full discussion of it here: http://magonia.haaan.com/2009/ptero/

So sadly another hoax. The world of cryptozoology attracts hoaxers, I am afraid, as do many sciences, the cloning sector for one , often makes claims that it cannot substantiate. Still It makes life interesting,so we do not despair :-)

This picture posted of this pterodactyl is a fake . Civil War historians said the uniforms were not acurate . This was posted after one that was posted that historians said was accurate and photo specialist said it was an authentic photo from that time period . The one above is a proven fake but there is a real one on line . The one above was posted to discredit the actual photo . There is still an actual photo of the Giant Grizzly on line . There is also proof of man and dinosaurs walking the same creek line . They found the footprints of a estimated 10 foot tall woman in sediment in a Texas creek after flood water washed away the top layer . Many animals that science has declared to be extinct for millions of years have been found and still exist . There was a 14 foot Grizzly killed in Alaska not long ago . Its better to keep an open mind and do your own research than blindly following what scientists are telling you .