Killer Kangaroos in the USA? 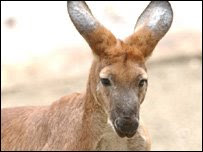 The first recorded sighting of the so called killer Kangaroos was in in 1899. Many people have since reported seeing ‘carnivorous kangaroos' in both urban and rural areas through out the .. They are described as being between 4 feet and 6 feet tall with glowing eyes .However Kangaroos are normally vegetarian.

In 1934 several witnesses including a man of the church saw a Kangaroo, it was said to have been seen fleeing the scene carrying a sheep.
From 1957 to 1967, in kangaroos were reported by numerous eye witnesses . They named the creature "Big Bunny".

In 1974, two police officers in answered a call from a resident who claimed that a kangaroo was sitting on his front porch. The police had a good laugh until a few hours later when they actually had the five-foot high animal cornered in a dark alley. One of the officers decided that this nonsense had to stop and he was going to take it in. He decided to handcuff it. With this, the kangaroo suddenly started screeching and became vicious. It punched the officers in the face and kicked them in the shins. The officers backed off and awaited reinforcements. Additional squad cars arrived and the kangaroo hopped down the street, jumped a fence and vanished. Kangaroos are known to kick as a defence and the kick is very strong. There have been very few reports of them actually killing anyone though.

This seemed to set off a wave of sightings in and . A newspaper boy saw it after the creature was almost hit by a car near and . It apparently just hopped away. It was also reported to be seen in ’s Schiller Woods

.Then it was spotted again by a police officer in , outside the city limits. He stated that the kangaroo jumped about 8 feet from a field onto the road. The following night it appeared again. Half an hour after the last sighting, a kangaroo was reported 50 miles away, in .

On November 3rd, the kangaroo was reported by Frank Kocherver in a forest preserve.

Then November 6th , a truck driver near just missed hitting a kangaroo.

In July 1975, a woman was travelling down the highway near and saw a kangaroo alongside the road. She watched it as it hopped away into a cornfield and disappeared.

Brian Joseph related a peculiar sighting at The Daily Grail, which occurred in in 1981 after several evenings where “screaming” had been heard in the woods nearby:

I caught sight of something in a clearing about 200 feet away from me. I thought that it was a deer sitting down the same way a dog sits down. My dog caught sight of it the same time I did and started to run towards it. Thats when I realized that it was not a deer, it took huge hops, looked like a kangaroo and let out a repeated burst of the sound that I had been hearing for months. The dog chased and the thing hop/leaped and turned. The dog followed a bit into a brush area and then came back out, the same as other times that the sound had been heard. This was in the days before the internet so trying to find out information on it was not easy. I tried to find out what type of sounds kangaroos make and anything I found never mentioned a bird like noise or anything like that. I also wondered if it was somehow associated with a UFO that myself and another person had witnessed in the area in late 1980.

The strange noises he had heard seemed to lead him to refer to the creature as being a “screaming kangaroo”.

Then there was this :

An unusual sighting in Bay has some residents imaging they might be living in . The Bay St. Louis Animal Control Officer has received three calls of a Kangaroo sighting this week. All three callers say they saw a kangaroo about four feet tall, hopping around the area of and Highway 90 on Thursday. When our cameras went to the area, we saw no animals. The animal control officer is investigating the sightings, and says it's possible someone owned an exotic pet that got away recently or possibly during the storm. But so far no one has reported a Kangaroo missing.

So what are these creatures? Well the sensible answer would be that they are escapees from a zoos or private collections. The fact they described as eating meat is peculiar. No kangaroos have been reported missing, allegedly, but then would you want the authorities coming to investigate you if you reported one lost or escaped? So it may that some are escaped from places but not reported. The only evidence seems to be eye witness testimony.( that’s nothing new in cryptozoology is it?) There is supposedly a photo which was taken in April 1978, in which is said to show a slumping figure that looks like a kangaroo, but I have not been able to find a copy of it . Someone reading this may have seen one ,if so please comment. Kangaroos have been meat eaters in the past (10 to 20 million years ago according to fossils found in Australia in 2006) but it is unlikely any survived in the until this century, so unless someone has been playing , they will be chalked up to escapees from a zoo or mass hysteria.