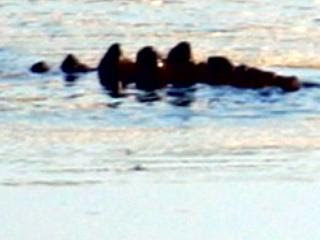 Having written a blog post on Mokele Mbembe I thought a look at other stories of lake monsters in Africa would be interesting. There are quite a few, for example in Zimbabwe there is the Chipekwe and in Angola there is the Isiququmadevu, and in the Gambia Ninki Nanka .I decided to look for the less well known stories.

There is The Mamlambo
The "half horse, half fish" monster called Mamlambo inhabits the Mzintlava River in the Mount Ayliff area of South Africa. Eyewitnesses describe this creature as being 20 meters (67 ft) long, with short stumpy legs,having a crocodilian body, and the head and neck of a snake. It is said to have a hypnotic gaze and drag human and animal victims into the water.It apparently sucks their brains out.
The Mamlambo is mentioned in Xhosa tribal mythology. Government sources say that the creature claimed seven human victims in 1997 and several goats. Freelance journalist, Andite Nomabhunga, reported that nine human deaths have been blamed on the Mamlambo, including a school girl. Mount Ayliff police claim that most of the alleged victims which have been found had simply drowned. Sometimes, crabs have eaten away at the soft tissues of the face and throat. Despite police explanations for the deaths, villagers claim that they are not just superstitious tribe people, but educated people who are being terrorized by the Mamlambo. On April 29, 1997, the Reuter wire service reported that at an Eastern Cape legislative meeting held in Bisho, South Africa, the agriculture minister, one Ezra Sigwela, told an astonished governing body that a "half-fish, half-horse monster" had devoured at least seven victims in his region of Mzintlava River, located in the northern area of the former Transkei black homeland. Sigwela pledged that he would solicit the help of the national agriculture ministry, in the hopes that they would organize a mission of armed nature conservation officers in order to hunt and kill the beast. There is no mention of what happened or if the hunt took place .


And this one from a reliable source :REUTERS NEWS SERVICE13 Jun 96 By Celia Locks and Kevin Rafferty.:South Africa has one more attraction for ever-eager tourists: its very own monster. Zulu legend has it lurking at the bottom of the 300-foot Howick Falls, exerting a magical force as it sucks victims into its underwater lair. The beast, said to look just like the one in Loch Ness, is drawing sightseers to the town of Howick in KwaZulu-Natal. They can see fuzzy photographs of a skinny long neck rising out of a swollen body, with three smaller `monsters' (looking suspiciously like ducks) swimming beside it. CL.

And more on this: The Inkanyamba are said to be a population of giant migratory, carnivorous eels, which are allegedly indigenious to southern Africa. The most well known of these is said to dwell in the deep pools beneath South Africa's legendary Howick Falls (known to the Zulu as "kwaNogqaza" or "The Tall One").

There is said to be a 100 foot-long lake serpent that lurks in the swamps, rivers, and lakes in Uganda.It is feared by natives because of its predatory nature, aid to often take large mammals or fishermen. Explorers of the region heard these bizarre tales that became more credible as some of them were said to have observed the creature themselves.

Then there is the dragon-like beast known as Ninki-Nanka which lives in the swamp land of Gambia. Ninki-Nanka translates as Dragon-Devil. The Ninki-Nanka is said to be a large reptile, possibly as large as 30 ft (9m) living in the mangrove swamps and rivers of Gambia. The beast is said to have the body of a crocodile, the neck of a giraffe, the head of horse with three horns, one right in the middle of its head. The reclusive monster spends most of its time submerged in the mud in the regions of inland swamps and upriver from the coast

In Cameroon, there is another creature called Le’Kela-mbembe. It is said to grow around 70 feet in length and will eat the leaves from the Esem Tree.

Also said to dwell in the lakes of western Africa, is the Dingonek which has been described as being approximately 12-feet in length, with a square shaped head, a long horn, large canine teeth , and a tail complete with a bony, dart-like appendage, which is reputed to be able to secrete a deadly poison. This creature is also said to be covered head to toe in scales.

And even on the beaches monsters have been seen off shore :On November 1st 1922, at Margate Beach in South Africa, an amazing spectacle took place. Witnesses say that two whales were engaged in battle with a sea monster. The monster had very unique feature including snowy-white fur and a very large elephant-like trunk. The battle lasted 3 hours before the monster weakened and the whales were victorious. It's dead body later washed onto the shore. Measurements taken show that it was over 47 feet, including a 10 foot tail. It had 8-inch long fur, but no apparent head. It only had a trunk-like projection 5 feet in length. That is why the creature has been given the name "Trunko." The body was said to have been buried but no one knows where.

Africa is indeed a place of mystery and mysterious beings and is indeed the dark continent as regards monsters and beasties. It is probably the most likely place to find unknown animals with parts of it still not completely explored.