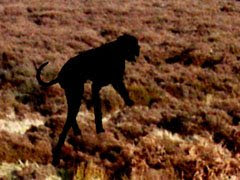 On the 150th anniversary this year of Sir Arthur Conan Doyle birth, I began thinking about the tales of ghostly hounds and whether these stories may have influenced Conan Doyle to write the Hound Of the Baskervilles. Tales of encounters with strange black dogs abound in Britain form a part of local folklore. These dogs are not conventional dogs but have something mysterious or ghostly about them. They are often described as being particularly large, and having red glowing eyes. Stories of encounters with strange black dogs have been told in Britain since the Anglo-Saxon chronicle, written in the 12th century, which details an account.

They have different names depending on the area the stories come from;
Barghest alternately described as a small as a bull mastiff or as large as a bear with shaggy black fur and fiery red eyes. Seen around the northern English counties of Yorkshire, Durham, and Northumberland, it only appears at night in certain locations, mainly coastal villages and churchyards. It is said that the sighting of a Barghest is a guaranteed portent of disaster and misfortune.( I would think the sighting of any such animal would be a misfortune in more ways than one!)
Cu Sith is the name of the Black Dog of the Scottish highlands, It is said to be of a huge size and carry off people.
Freybug – A monstrous Black Dog that terrorized English country lanes in medieval times.
Galley-Trot is said to appear on the lonely roads of Dulwich and Woodbridge, and the Bathslough bog of Suffolk. It is another large shaggy dog.

Gwyllgi or dog of darkness–Is the Welsh equivalent of the Black Dog. Again said to be a giant mastiff that seems to enjoy frightening people.

Gytrash seen around Lancashire and Yorkshire and said to be a portent of imminent death and disaster. Again described as a huge Black Dog with shaggy fur, and red eyes that glow.
Mauthe Dhoog was a Black Dog that allegedly haunted Peel Castle n the Isle of Man in the 17th Century.. In 1871, the remains of Simon, Bishop of Sodor and Man (died 1247) were uncovered during excavations. The bones of a large dog were found at his feet. Maybe the origin of the story ?
Padfoot seen on the moors around Leeds, in Northern England. Called padfoot because you can hear it padding behind you.

Typically, these dogs are encountered at night in lonely places. Perhaps the most celebrated black dog story is the one set in Suffolk, where the beast was called Black Shuck from the Old English scucca, a demon. During a storm on Sunday, 4 August 1577, Black Shuck is said to have appeared in St Mary's church in Bungay, Suffolk, and run between two worshippers, apparently wringing their necks and killing them. On the same day, a similar scene unfolded in Blythburgh church seven miles away. The hell hound of Norfolk is another popular tale and one which in 1890, came to prominence when a young boy was rescued from the North Sea and told a tale of being forced to swim further and further from the shore by a huge black dog who had chased him into the sea. Even during the 1920's and 1930's there were reports from the fishermen of Sheringham of hearing a hound howling on the cliff tops during stormy nights. As recently as 1970 a sighting of Black Shuck made the headlines. When a huge hound was seen pounding over the beach at Great Yarmouth. Then in 1980, a woman claimed to have met the black dog , whilst out walking with her young son. near Wisbeach.

It all sounds like a it is a fairy story ,or so I thought and then I came across this account:

Towards the end of June 1999, I had been out walking my dog, Ben, along the green avenue leading from Monkton Farleigh Manor to South Wraxall. It was late in the afternoon and we were coming to the end of our walk. We were probably only a mile or so from the village when I noticed a huge black dog standing on the path, about 200 yards ahead of us. Normally this wouldn't have seemed out of the ordinary to me, but my dog Ben is a rather anti-social animal, who always barks non-stop and chases after any other dogs that he comes close to.

As we came closer to the dog it suddenly dawned on me that Ben hadn't made a sound, which was really strange because he must have been able to see it as it was on the path, and it was now only 100 yards away. As we walked closer, Ben started to run off ahead towards the big black dog. I thought he was going to run up and start barking at it, but as he reached the other dog, he just carried on past it as if he hadn't even noticed it at all. As Ben carried on running the other dog turned around and started to run up along side him. They ran together for about thirty seconds before I lost sight of them over the hill.

When I came over the top of the hill, Ben was just sitting on the path waiting for me. I looked around but there was no sign of the other dog. The surrounding area was quite open, and as I was only thirty seconds or so behind the dogs I was sure that I would have seen it somewhere. The strange thing was that Ben hadn't made a sound during the whole encounter, where as with all other dogs he would have barked at it the whole time. It was only later on when I mentioned it to some friends that I realised that what I had seen must have been a ghostly black dog".

So real dog or ghost? It has certainly been around for a long time!