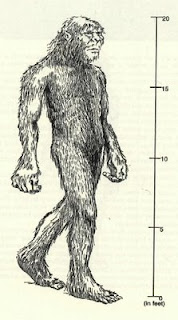 
I did some more researching on the Big Grey Man and found the following:

In 17th Century, a man of the clan Murray was reported as having captured a wild man in Craigiebarns Rocks and a chained wildman still appears in his family's heraldry /shield.The next mention was in 1791 poet James Hogg, known as the Ettrick Shepherd, described seeing a huge figure on Ben Macdhui whilst tending his sheep. As he watched the halo which had formed around him due to the combination of sunshine and the mist he looked up and saw a huge, looming figure. He fled not stopping until he reached some of his fellow shepherds. Hogg later said he believed that the phenomenon, which had so frightened him , was in fact an uncommon natural phenomena known as the ‘Brocken Spectre’ and was a reflection of himself caused by the weather conditions. So could the grey man be just an effect of climatic conditions?

Hugh Welsh,in 1904,was camping with his brother by the summit cairn of Ben Macdhui .He said he heard the type of footsteps which later others described as being the big grey man. They heard the noise both and night and in daylight describing it as being like ‘....slurring footsteps as if someone was walking through water-saturated gravel.’ Welsh also recalled they were ‘Frequently conscious of ‘something’ near us, an eerie sensation of apprehension, but not of fear as others seem to have experienced’. They talked to the head stalker at Derry Lodge and he said to them, ‘That would have been the Fear Liath Mor you heard.(Fear Liath Mor is Gaelic for ‘Big Grey Man’ ).
Then in the last century George Hall in his book" Leaves From A Rambler’s Diary", told of the experience of an unnamed friend who worked in the Cairngorms. The account was sketchy ,but it seems the friend had an odd experience on Ben Macdhui involving a ‘presence’ which frightened him to such an extent he left the mountain, after which the sensation faded.
The Cairngorm Club Journal for 1921 noted a recent letter to the Aberdeen Free Press in which the writer, ‘....called attention to a myth prevalent in Upper Deeside to the effect that a big spectral figure has been seen at various times during the last five years walking about on the tops of the Cairngorms. When approached, so the story goes, the figure disappears.
Then in 1924 Dr Ernest A Baker’s book" The Highlands With Rope and Rucksack" was published. Baker also related the experience of a friend whose job took him into the mountains. Alone on Ben Macdhui one day he became aware of a terrifying presence which, he said , ‘disturbed him in a manner which was beyond his experience’. Baker’s friend fled Ben Macdhui. Baker also reports how one mountain climber had told him that he would under no circumstances spend any time on Ben Macdhui alone, even in daylight.

More recently there were reports around 1993 /1994 in the area around Torphins, near Aberdeen. Three young men who have not been named,were walking along a wide track through a forestry plantation. One of them saw a dark human-shaped figure run across the track, two hundred yards in front of them. He felt a sense of terror , but his friends saw nothing. They teased him and said he made it up.Then all three saw a face, that they afterwards described as "human... but not human", peering out at them from between the branches of the fir trees. One of them threw a stone in the general direction of this face and whatever it was disappeared. These three youths had a second encounter with a similar creature a few weeks later. One of the three claimed later that a female friend of him, living in a secluded cottage, has twice seen a dark, hairy figure standing in the forest watching her cottage, before slinking away into the undergrowth

Another story was related to the author of 'The Big Grey Man of Ben MacDhui', a man called Richard Frere. He told of a friend of his who decided to spend a night camping on the top of the mountain. In his tent near the cairn he began to suffer a feeling of morbidity and a sense of unreality but finally fell asleep.
He woke up with moonlight shining through a gap into his tent and suddenly realized that he could see something brownish between himself and the moon. Horrified, he froze, and waited for the thing to move away. When it did, he looked out into the brilliant moonlight and saw a large brown creature 'swaggering' away down the mountain side. He said the creature had 'an air of insolent strength' about it. Incredibly, he estimated the height of the thing to be twenty feet, and described it as having an erect posture, broad shoulders and a tapering waist.
Another author Wendy Wood, author of 'The Secret of Spey' said she was approaching the pass of Lairig Ghru in winter whereupon she heard a voice. She described the voice as being of 'gigantic resonance' and reminiscent of Gaelic. After a brief look around the local area to see if she could find the person she had heard speaking, she realized that she was indeed alone. When she walked away, she could hear footsteps following her as if immediately behind. At first she thought the footfalls to be echoes of her own, but then noticed that they did not coincide or correspond to her own footsteps.
There are other stories from other mountains in the are too. One day during the early 1920s, an experienced mountaineer called Tom Crowley was coming down alone from Braeraich in Glen Eanaich, close to Ben MacDhui, when he was horrified to see a huge grey mist shrouded figure with pointed ears, long legs and finger-like talons on its feet. He did not stay for a closer look . Another Mountaineer Alexander Tewnion wrote an account of his 1943 experience for The Scots Magazine:
‘Of all the experiences that have come my way, one stands out above all others in its strangeness. This was when I shot the Fear Liath Mor, the Big Grey Man of Ben Macdhui. It happened like this. In October 1943 I spent a ten day leave climbing alone in the Cairngorms. Rations were short then, and I carried a revolver and ammunition to shoot any hares or ptarmigan that came my way. One afternoon, just as I reached the summit cairn of Ben Macdhui, mist swirled across the Lairig Ghru and enveloped the mountain. The atmosphere became dark and oppressive, a fierce, bitter wind whisked among the boulders, and, fearing a storm was imminent, I took hurriedly to the Coire Etchachan path. Above Loch Etchachan the path angles easily downhill. I was swinging along at about five miles an hour when an odd sound echoed through the mist - a loud footstep, it seemed. Then another, and another. Spaced at long intervals!’
‘I am not unduly imaginative, but my thoughts flashed instantly to the well-known story of Professor Norman Collie and the Fear Liath Mor. Then I felt the reassuring weight of the loaded revolver in my pocket. Grasping the butt I peered about in the mist, here rent and tattered by eddies of wind. A strange shape loomed up, receded, came charging at me! Without hesitation I whipped out the revolver and fired three times at the figure. When it still came on I turned and hared down the path, reaching Glen Derry in a time I have never bettered since. You may ask, was it really the Fear Liath Mor? Frankly, I think it was. Many times since then I have traversed Macdhui in mist, bivouacked on it in the open, camped near its summit for days on end on different occasions - often alone, and always with an easy mind. For on that day I am convinced I shot the only Fear Liath Mor my imagination will ever see.’

So grey man or mist? Well mist does not make the noise of footfalls.

Thank you.I had never heard of the linton worm before (story on your site) . interesting site you have there.

One of the few stories I remember being read at primary school was a tale set on Ben Macdhui. I can't recall the details unfortunately, but I think it was supposed to be the story behind the grey man told as a ghost story / fairy tale. I have no idea what the book was called, but the imagery of Ben Macdhui and the Lairig Rhu, mist-covered and home to this lonely figure, has stuck with me for years.

I wish I could track it down to read it again.

Now I want to get the Fear Liath into "Some Other Scotland" somehow!

i have gone through this blog. i am a kinda net savvy person. so nowadays im doing some online business and this blog is doing great for me.