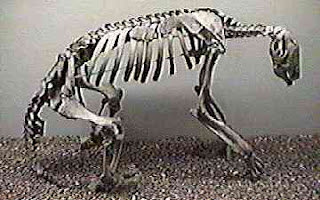 The South American Bigfoot known as Mapinguari or sometimes referred to as Isnashi, is described as a tall black-furred hominid usually seen in the jungles along the 'Rio Araguaia', a large river in Brazil's state of Mato Grosso do Sul.

Bigfoot like creatures have been reported in many areas of Brazil for over two hundred years, In March / April of 1937 one of these creatures supposedly went on a three week rampage at Barra das Garças, a small farming town 300 miles southeast of the city of Cuiabá, capital of the central state of Mato Grosso do Sul. Reports included unconfirmed sightings, humanoid-like tracks as long as 18 inches, and horrible roaring from the woods. This carnage made the major newspapers in Rio de Janeiro and São Paulo.

Other reports from South America describe the Mapinguari as a large foul smelling nocturnal animal, covered in red hair and with a frightful screaming cry. This species of the bigfoot type creature is supposedly a strict vegetarian. It is said to have feet that are turned backwards and claws capable of ripping apart the palm trees it feeds on. Other local names for this type include 'capé-lobo' (wolf's cape), 'mão de pilão' (pestle hand), and 'pé de garrafa' (bottle foot).

Because of such reports some naturalists believe that these are surviving specimens of the giant ground sloth, Mylodons.They were supposed to have died out around ten thousand years ago. They were red-haired vegetarians that emerged about 30 million years ago and roamed the Americas, the Caribbean, and Antarctica. With large claws that curled under and faced backward when they walked on all fours, these giant marsupials could also stand on their hind feet like people. Some species had bony plates that made their skin very tough. A skeleton of one is pictured above.

Other reported hairy hominids in the South American countries include:

Since the Portuguese and Spanish arrived and settled in South America, a steady stream of reports about unknown beasts have been written up in the media. The most read were those by Colonel P. H. Fawcett, made world famous by his still unexplained disappearance with his eldest son in this area. The Colonel's diaries were preserved up to his last fatal expedition, and published by his son, Brian Fawcett, under the title 'Lost Trails, Lost Cities'. In it, the Colonel describes an encounter in 1914 with a group of enormous hairy savages that, although looked very primitive, were carrying bows and arrows. Apparently these wild men could not speak, but just grunt, and upon arriving their village, the Colonel and his group were on the verge of being attacked, barely avoiding capture or death by firing their guns into the ground at the ape men’s feet, who then fled in terror.

Another interesting combination of folklore and fact in these stories. It could be some giant sloths still exist in remote areas and these are the bigfoot like creatures seen. Certainly is as likely an explanation as a Bigfoot.