The lone hunters of Mokele-Mbembe

Most people have read or heard of Roy Mackal's book on the hunt for the so called living dinosaur in the Congo "Mokele-Mbembe" or seen articles about Bill Gibbons and John Kirk's expeditions. But there have been others who have ventured alone to the area to seek out Lac(lake) Tele and look for the creature. Rory Nugent went in 1986(book Drums Along the Congo 1993 ed. Houghton Mufflin Co) and Redmond O'Hanlon ( book Congo Journey 1996 Penguin books).
Rory Nugent's book is the more upbeat of the two as O'Hanlon's has a more negative view of the indigenous people of the area. Both are amusing in parts ,especially about meetings with witch doctors. Nugent took a photo of something but as you will see from the text he was unable to get close enough to investigate. 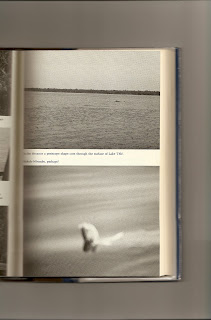 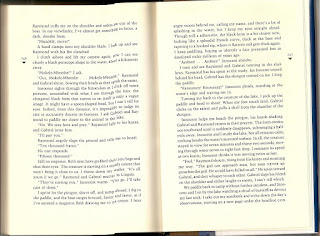 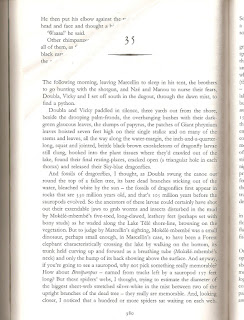 He ends his journey to Lac Tele by asking this:
p.379 " So Doubla". I asked softly"Why did Marcellin swear he saw the dinosaur?" "Don't you know?" said Doubla, giving me his first real smile." It's to bring idiots like you here. And make a lot of money"

So is it just a con? The races of the Congo refer to Mokele- Mbembe as the spirit of the forest and say it takes several forms. Some indigenous people's when questioned point to pictures of a Rhinoceros as the dinosaur and it is claimed that it is a race memory from when the jungle was once plains and the rhino roamed there. More than one investigator has pointed out the lake is quite shallow and it would have to be a small dinosaur to hide there. The water levels may rise in the rainy season of course. It is said that if there is any place that a dinosaur could still exist it would be in the Congo jungles but the jungles weren't always there and it would have been grass land plains thousands of years ago. There are still patches of this in the jungle, clearings where the animals gather (See the Channel 4 programme Congo , which is still sometimes transmitted)
So sadly it seems there may not be a living dinosaur unless it is some sort of evolved creature from the era of the dinosaurs. It would be unlikely to look like something from Jurassic Park though , probably much smaller and a changed appearance in order to adapt to the changing world around it.
Posted by Tabitca at 16:19

John Kirk here. MM does not live at Lake Tele, but is known to frequent it.

The idea that the MM thing was concocted to bring white people and their money to the region is preposterous. Freiherr von Stein zu Lausnitz wrote about this creature in Congo and Cameroon in 1813 and it is largely from his and Abbe Proyart's writings in 1776 that we know about this animal.

Agnagna's alleged sighting is dubious at best. The notion he or anyone else has made a lot of money off this is fallacious. The extortionists at Boha have made money by holding expeditions for ransom, but no one else has ever made a cent from this.

There is no con here. You have related the statement by one individual who is obviously talking without any reference to the facts.

I have personally interviewed many witnesses in Cameroon about this animal and I can assure you that they affirm what the Congolese have been saying for years, there exists a large reptile resembling a dinosaur. It has been seen by pygmy and Bantu alike and no one can tell me that this is a con job.

I enjoy your blog and find it most informative.