The Strange Story of the Van Meter Monster

Over 100 years ago a strange creature was sighted in a  small town called  Van Meter in Iowa.In October  1903, strange  winged creature had been sighted around the town frightening residents . It was described as having large bat-like wings, left a terrible smell and firing beams of light from its forehead.

The Van Meter Monster was first seen by a man called  Griffith. He saw what he thought was an electric searchlight gliding across a storefront before disappearing. The next night, the town doctor was awakened by a flash of light. Grabbing his shotgun, he ran outside to find a half-human creature on the ground. He fired, and the monster leaped into the air and flew away. Bank cashier Peter Dunn later also  saw the creature and opened fire. Dunn even took a plaster cast of the "great three-toed tracks." it left behind. ( which has since disappeared)

Then O.V.White, was awakened by a loud noise, and when he looked out his window, saw a creature sitting on top of a telephone pole. When he shot at it, positive that the bullet hit home, it simply flew away. This awakened Sidney Gregg, who had been sleeping in his store nearby. Gregg said the monster hopped like a kangaroo. The local high school teacher saw it and called it  some sort of antediluvian monster.Volunteers assembled as an armed posse. They headed for the old brickyard where J.L. Platt Jr. heard a noise down by the abandoned coal mine.

"Presently the noise opened up again, as though Satan and a regiment of imps were coming forth for battle. The monster appeared, joined by a smaller version. In a brilliant light they sailed away, only to return in the morning where the men had gathered "to rid the earth of them" with their firepower heard far and wide.The reception they received would have sunk the Spanish fleet, but aside from unearthly noise and peculiar odour they did not seem to mind it, but slowly descended the shaft of the old mine."

A strange tale indeed.The cast of the tracks has not been found.All those involved however were prominent citizens so unlikely to be involved in a hoax. So what could it have been? There are some bats that have enormous wing spans such as the giant golden-crowned flying fox, a.k.a. a golden-capped fruit bat, a species of megabat endemic to the Philippines. It is one of the largest bat species in the world, weighing up to 3.1 pounds but with a wingspan that can stretch to 5.6 feet.Could it have been a species of large bat ? It would appear so if it weren’t for the firing lights from its forehead.Unless the bat had very shiny eyes or perhaps phosphorescence of some kind on its head from the mine,no known species does that. There are those who speculate it was alien from another planet or from an underground world beneath our feet.(The Hollow Earth theory).Unless it returns or the cast of its footprints turns up,we will never know what occurred in October 1903.

Just heard the sad news that cryptozoologist Scott Marlowe has passed away. He was a fellow cat lover and good friend.My condolences to his family especially his son. He did a lot of work in schools introducing children to cryptozoology .A lovely man who I will miss . Rest in Peace my friend. I hope you find the answers to all your questions .The world will be a little dimmer without your shining light.x
Posted by Tabitca at 05:58 No comments:

Mrs Lilian Howe wrote to Tim Dinsdale about a  sighting of a strange creature off  Mingamy Pier ,Kilchoan Ardnamurchan on 21st June 1965  .Three people ,her husband,her  cousin and herself saw something about 100 yards off shore.It  looked like two humps that could be one creature moving through the water . Her husband looked through his binoculars and could see huge shape about 40 feet long.At  first he  thought it was a submarine but then he  saw legs or flippers moving at side of body causing turbulence in the water. He had seen basking sharks and other large sea creatures before but this was nothing like anything he had ever seen.

There were no other reports at the time but I came across this newspaper report  from May 1895.A similar time of year which may be significant.(if you click on it ,it should enlarge for reading easier). 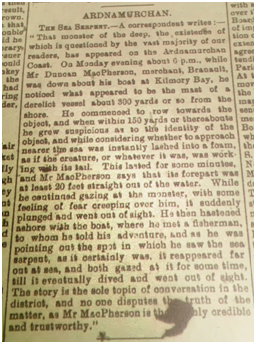 Again it was someone who knew the sea and would recognise known creatures .It could be the same creature ,as sharks and whales have been known to live over 100 years. Maybe it comes back to the area for a reason; to look for a mate or to feed .It will be interesting to see if any other reports surface,or if any other  large creature is seen in the same place that could be mistaken identity.

The Truth About the Megalodon

Researchers in the U.K. have revealed the true size of the megalodon, the prehistoric giant shark. Some may be disappointed that it was not a 100 foot version of the great white shark as portrayed in the movies.

Experts from the University of Bristol and Swansea University have shed new light on the giant megalodon, which is history’s largest marine predator. While the modern great white shark can be over 20 feet long, the megalodon, which lived from 23 million to 3 million years ago, was over twice the length of a great white. Scientists can now reveal the size of the rest of the megalodon’s body, including its huge fins.

The researchers note that megalodon fossils are typically huge triangular teeth larger than a human hand. Armed with data from these fossils, scientists used mathematical methods to ascertain the size and proportions of the megalodons. Comparisons were also made with the creature’s living relatives.

“Megalodon is not a direct ancestor of the great white but is equally related to other macropredatory sharks such as the Makos, Salmon shark and Porbeagle shark, as well as the great white,” said Dr. Catalina Pimiento of Swansea University, who supervised the study.

Estimates suggest it grew to between 15 and 18 metres in length, and therefore a  52.5-foot-long megalodon likely had a head 15.3 feet long, a dorsal fin approximately 5.3 feet tall and a tail around 12.6 feet high, the scientists found. “This means an adult human could stand on the back of this shark and would be about the same height as the dorsal fin,” they said, in the statement.

Some will be disappointed that it is not a huge version of the great white .It in fact had a blunter nose and was not as large as some expected. Still a monster though.

Swedish lindorm or  Danish lindorm 'serpent' is a legendary dragon-like creature or serpent . Sweden has three species of snakes: the smooth snake (Coronella austriaca), the adder (Viperia berus) and the grass snake (Natrix natrix).Denmark and Norway have similar snakes,the only poisonous one being the adder.None of which are large enough to be a lindworm. In modern Scandinavian languages, the cognate lindorm can refer to any 'serpent' or monstrous snake.

The most common description of a lindworm is a wingless creature with a serpent’s body, a dragon-like head, scaled or reptilian skin and two arms ending in claws on the upper body. Its about twenty feet long and thick as a man’s thigh.They slither like a snake but can use the arms to help them.Some spit poison ,deadly  to humans and have a forked tongue. Its eyes are large and saucer-shaped. The tail is short and stubby.Some have manes and a yellow underside.

The belief in lindorms, persisted well into the 19th century. The Swedish folklorist Gunnar Olof Hyltén-Cavallius (1818–1889) collected stories of the creatures in Sweden. He met several people in Småland, Sweden that said they had encountered giant snakes, sometimes equipped with a long mane. He gathered around 50 eyewitness reports, and in 1884 he set up a big reward for a captured specimen, dead or alive. Nobody ever claimed the reward .A sample  of the stories :

In the province of Skåne, on a Whitsunday in the 1850s, Elna Olsdotter was on her way to church when she stopped to rest under a big lime tree. An enormous lindworm appeared from within the tree and devoured her.

In another part of Skåne, a little girl and her mother were picking berries near the stump of an old lime tree when the girl saw a huge snake lying in the tree. When she reached to touch it, she was snatched up and eaten.

Some Swedes believed that the lindworm was a huge horse-headed serpent that guarded ancestors’ graves and burial mounds and, when it grew larger, became a sea serpent.

When folklorist Jan-Öjvind Svahn talked about the creature during a TV show in the 1980s, he received accounts from more than twenty people who saw huge unknown animals in the woods.

One woman said that her Uncle Ingvar took her to a place in the backwoods where he grew up that was known as lindworm land. There were several streams that crossed each other and moist moss-covered ground between them.He believed that lindworms were very large eels that were migrating from one stream to another.

So do Lindworms still exist? There could be an unknown species of large snake or as one person suggested large eels that are rarely seen.Or maybe the stories have some truth in them and a large serpent like creature that eats humans is still around.