More on the Oklahoma Octopus creature 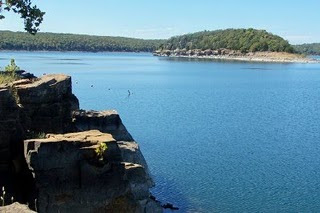 In , , and ( sometimes spelt Oologah) have become the subject of media  attention due to stories that   a freshwater octopus living in them pulls down swimmers to their deaths. The creature that supposedly resides there is described as reddish-brown, leathery skin and approximately the size of a horse. Some say it looks like an octopus , others like a shark with tentacles.
All the lakes are man made.   is a reservoir  constructed between 1962 and 1965 for the purpose of providing municipal water to nearby towns along  the Little River. (The lake is named after the Native American legend of the Thunderbird, a supernatural bird of power and strength.) was created by damming the . The earth-fill dam was constructed between 1947 and 1952 for purposes of flood control and hydroelectric power generation. was finished in 1974. The recent nature of the lakes makes it unlikely that any ancient creature resides there.
There are Native American stories about the octopus, going back nearly two hundred years. Most of the tribes in were transplanted there in the 1830s. The tribes  settled around the water ways, which then became the lakes. The local legends talk of creatures that lived in the   spring-fed ponds that dotted the area before the lakes were there. The stories go on to say that the ponds were linked underground so the tentacle creature would lurk just beneath the surface waiting for prey to come for a drink. It would then drag them to their deaths. When the lakes were made  the creatures moved in  but still lurked  in the old springs that lead to the lake bottom.
Tyler Shuman, Ruthie Simple, and Bruce DelRoy were three teenagers reported to have drown, pulled down by the creature and the newspaper reports also apparently said the two other teenagers with them had blister like wounds and scabs , like the marks caused by Octopus suckers. However I have been unable to confirm this.
In January 2009 A group of teenagers  apparently filed another sighting of the Octopus .(again I have been unable to find official confirmation of this)
Many say a freshwater octopus is not a possibility, however there may be another  explanation . Divers in the lakes have seen giant catfish and it is now known that large cat fish will drag a swimmer down and they are carnivorous. It is possible the long whiskers of such a huge fish(Some say as big as a car) could be mistaken for tentacles waving about. There have also been reports of juvenile alligators being seen .I would think the catfish is the most likely culprit. It may not be as exciting as an octopus, but just as deadly and  just as interesting.
Strange State: Mysteries and Legends of Oklahoma

I have lived by Lake Thunderbird my whole life and have never heard of an octopus lurking in its depths and nor has any that live around it! Huge catfish and rather large water moccasins do dwell in the lake but on octopi.

hi my name is zack and i have been to oolagah several times i camp swim and fish there .... one time i saw two cat fish that were redish brown come to the surface for several minutes each one was about six feet long and four feet wide and were very broad and the base of there head ... if any one has questions to were i saw this they can contact me at 918-804-0286

Ummm... the teenagers named in the post are characters from "Lost Tapes," an Animal Planet show available on Netflix which was a "found footage" type fiction show. The purpose of the show was to speculate on the existence of fictional creatures. The names given are not real people at all.

It is true that the names given are from the show "Lost Tapes", however the creatures mentioned in the show are not always fictional. There have been sightings of giant birds over Illinois, and thousands of reports of sightings of Bigfoot, and I've even seen the creature myself when I was younger. The show is made inspired by real stories but the locations and names are fictional.