There have been reports of living dinosaurs being seen on some Islands in . Here is the first one:
“Since the 1990s, a large ‘reptilian’ creature has been sighted occasionally on in . is located on the south coast of between Kandrian and Gasmata. The creature has also been sighted on , about 1km to the south of . The creature was described as having a long tail and a long neck and was 10–15 metres in length, with an appearance like a ‘very large wallaby’ and having a head like a turtle’s head. It walked slowly on two legs and had smooth, shiny brown skin. The top of the head was estimated to be as high as a house and the underbelly of the creature was as high as an adult. The creature was described as being fearful-looking, with the sighting being made from a distance of about 50 metres. The sighting was made in the late afternoon and was observed for a considerable length of
time.Nine people have seen the ‘reptile’ since the early 1990s, with sightings occurring every 4–5 years, usually around Christmas time. Perhaps the creature is primarily nocturnal, which might account for the small number of sightings. Two women from observed the creature from a boat on the south (unpopulated) side of the island as it was standing on some rocks at the bottom of a cliff. The animal has also been sighted swimming between and with its head above the water.”
These sightings have only been found on certain religious websites, I could find no newspaper articles etc. that you would normally expect. I suspect it was in fact a large wallaby that was seen. The people were apparently shown pictures  of dinosaurs in a book. but not a natural history book with pictures of different indigenous creatures. This creates a problem as if you are only shown pictures of dinosaurs you will chose what looks closest to the animal you saw , even if it isn’t the animal because that is the only choice you have , when someone says which of these does it resemble. Kangaroos and wallabies are most active at night, dusk and dawn Generally a solitary animal unless they have a mate and a family. 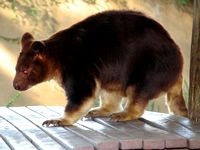 There are several varieties of kangaroo and wallaby in that area and vary in sizes from the very large (15 feet or 5 metres to the small 18 inches or 45cms). For example Doria's tree kangaroo Dendrolagus dorianus  is described as follows :Head and body length 20–31 in (51.5–78 cm); tail length 18–26 in (44.5–66 cm)( overall largest  length approx 5 feet or 1 . 7 metres); weight 10–32 lb (4.5–14.5 kg).  It has a  brown coat and a paler, shorter tail . You can see from the photo it doesn’t look quite how you would expect a kangaroo to look. As the animal was seen in poor light, at dusk it could easily be misidentified and the size wrongly estimated. It is also seen at  certain times of the year  which suggests that is it life cycle to be seen solitary and feeding at those times in the calendar.  These animals are also known good swimmers.
Then there is this report also from the same sites:
One afternoon late in 2005, three people from , near Gasmata in , , were on the beach on the south side of the adjacent unpopulated when they observed an amazing creature moving in the water. Simon Patolkit (lay preacher for the Catholic Church on ) and his wife Margaret described their sighting of the reptilian creature. The creature had a long neck and a long tail and had a total length of about 20 metres and a width of about 2 metres. The head was described as being ‘like a dinosaur’ with an ‘oval-like face’. The top of the legs of the animal were visible above the water, with the water being used to support the weight of the animal’s body. The skin of the animal was described as being ‘like a crocodile’ and was khaki green in colour. Dermal frills could be seen on the creature’s back, extending to the back of the head. Something was observed protruding from the back of the creature’s head. The creature’s neck was almost horizontal during the sighting. Details of the creature’s eye and mouth could not be determined, as the observers were about 30 to 40 metres from the animal. The sighting occurred for less than 30 seconds, until the reptile sunk into the water. No sound could be heard from the creature by the observers. The creature has not been observed since this sighting in 2005.
Again we have another problem as the report was passed on through an interpreter who only spoke pidgeon English which makes me wonder where terms like “dermal frill” came from. If the animal were as described walking through the water , it must have been shallow, so how in 30 seconds did it sink without moving very far? The idea of large dinosaurs walking in water to support their bulk went out after the 1950s when it was discovered they were quite capable of walking themselves. I wonder if perhaps the ideas from what they observed were based on old books as it may be the island is  a bit behind on text books. There were no newspaper reports I could find.

Could they have actually seen a Crocodile Monitor Lizard.? They have been recorded as reaching  15 feet(5 metres) in total length. with stories of 19 footers being told by tribesman of the jungles. Its head and neck are long, and are both covered by overlapping polygonal shaped scales which could look like a dermal fin. Some  live in swamps so I presume they can swim. The appearance of being supported by water could just have been the way the animal was swimming. I may of course be completely wrong but it just seems the more logical explanation. It may be that am sceptical because of where the reports come from, the creationist websites, and I am perhaps being unfair but it seems to me that it is a case of making the descriptions fit dinosaurs rather than  compare them with indigenous species to the area. What do you think?
Posted by Tabitca at 03:06