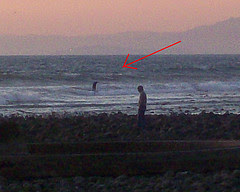 , June 11 : An Australian cryptozoologist is convinced that there is an aquatic beast related to the Loch Ness monster lurking in ’s . According to the Hornsby and Upper North Shore Advocate newspaper, in 1965, Rex Gilroy and his wife Heather began gathering information on a creature he believes still lives in the major waterway. After years of “patience, field trips and stakeouts”, Gilroy also known for his research on the equally elusive Blue Mountains panther hoped to finally obtain photographic evidence.Gilroy said they had compiled hundreds of sighting reports.“There are stories of houseboats being lifted up at one end when something underneath tried to surface over at ,” the Daily Telegraph quoted him as saying.The most recent sighting was by fishermen near Wisemens Ferry in March.“One of them momentarily saw a serpentine head and about 2m of long neck rise above the water before submerging,” Gilroy revealed.He also referred to a sighting in 1975 by Rosemary Turner, who reported a monster swimming upstream from a lookout at Muogamarra Nature Reserve.Robert Jones, an Australian Museum paleontologist, said that as far as science was concerned, the existence of the Hawkesbury River monster had never been proven.But Gilroy says the monster is part of Aboriginal folklore.Descriptions of the monster liken it to a plesiosaur, an aquatic dinosaur 70 million years extinct. The Loch Ness monster is also said to be related to the same extinct creature. (ANI) source: http://www.indiatalkies.com/2010/06/loch-ness-monsters-aussie-cousin-exists.html