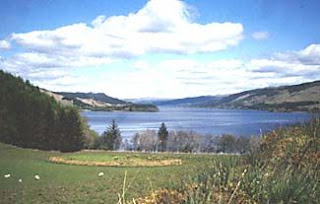 Loch Awe is a large fresh water loch in   with a length of 35km and total surface area of 14.9 miles .It is known for being a good fishing loch, with large trout being caught regularly. There is a  legend about its creation which concerns the holy well on Ben Cruachan. The well had to  be capped by a large stone every day after use. . One day the attendant was too tired to replace the stone and  fell asleep. When she woke up (apparently  three days later )she found that the well had flooded the valley below and created Loch Awe.
There have been stories of a creature in the going back hundreds of years. The creature is said to come ashore during winter and can be heard growling and panting.
One of the few written accounts of this creature was written by Timothy Pont, who chronicled what he called “gigantic eels” in the . He said he himself was frightened to fish in the because of the large eels and they also frightened fishermen away from the loch. The eels were  described these eels as being the girth of a horse and reaching huge lengths, such as 33 feet (11metres). The description sounds very much like the horse eels of .
We may  scoff at the thought of such large eels but further up the Western coast on the this report was printed in The  London Times  March 6, 1856:

The Sea Serpent in the
The , Parish of Lochs, Lewis, is at present the scene of an unusual occurrence.  This is no less than the appearance in one of the inland fresh-water lakes of an animal which from its great size and dimensions has not a little puzzled our island naturalists.  Some suppose him to be a description of the hitherto mythological water-kelpie; while others refer it to the minute descriptions of the "sea-serpent," which are revived from time to time in the newspaper columns.  It has been repeatedly seen within the last fortnight by crowds of people, many of whom have come from the remotest parts of the parish to witness the uncommon spectacle.  The animal is described by some as being in appearance and size like "a large peat stack," while others affirm that a "six-oared boat" could pass between the huge fins, which are occasionally visible.  All, however, agree in describing its form as that of an eel; and we have heard one, whose evidence we can rely upon, state that in length he supposed it to be about 40 feet.  It is probable that it is no more than a conger eel after all, animals of this description having been caught in the lakes which have attained huge size.  He is currently reported to have swallowed a blanket inadvertently left on the bank by a girl herding cattle.  A sportsman ensconced himself with a rifle in the vicinity of the loch during a whole day, hoping to get a shot, but did no execution.

So large Eels were not unknown in the lochs in the past. Food for thought for those who think the Loch Ness creature is a giant eel.
Sea Serpents and Lake Monsters of the British Isles

LOCH AWE MONSTER
Someone called Sallyumbo commented on one of Lindsay's posts and as it was so interesting I decided that I should also post it as a bloggo post in its on right!

Around Easter 2000, my husband and I were driving north past Loch Awe for our first weekend away together. As we drove alongside the loch, I saw to my amazement something that looked to me exactly like pictures I'd seen of the Loch Ness Monster. A long neck and head sticking out of the water at the front, and two humps behind it. It was moving quite swiftly through the water. I was completely astonished. I had never heard of any monster in Loch Awe. I actually said nothing, thinking that my new fiancee would think I was completely mad if I announced I could "see the Loch Ness Monster" so I just watched in silent wonder. A couple of hours later we stopped for lunch at a pub. There was tourist info available in the form of leaflets there, and one was about Loch Awe. Imagine my feelings when I read, "Loch Awe is said to be home to a monster like that of Loch Ness". "It does!! I saw it!!" I yelled,beside myself with excitement. Needless to say my fiancee thought I was crazy. But I'm sure I really did see what people call the Monster of Loch Awe.
from :http://forteanzoology.blogspot.com/