Two well documented sightings of  Caddy were in 1932 and 1933. F. W. Kemp, an officer of the Provincial Archives of British Columbia, revealed that he and his family had seen a strange creature in strait of Juan de Fuca and Major W. H. Langley, clerk to the British Columbia legislature, reported that on Sunday, October 1, 1933, while sailing near Chatham Island, just east of Victoria, he and his wife had also seen something odd.
Rupert T Gould  wrote about the two sightings in his book “The Loch Ness Monster “ in 1934.The pages below are from the 1976 reprint  by University Books USA.( I am middle aged and not ancient enough to have a 1934 copy lol).The accounts would have still been quite fresh at the time and so would be a reasonably accurate account of  what they thought they saw. 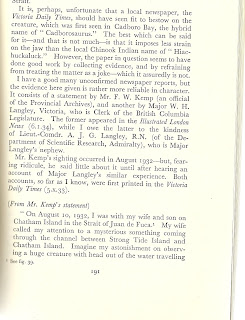 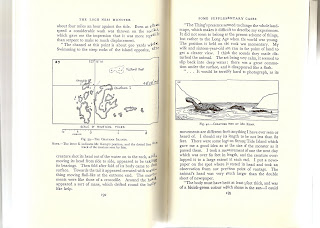 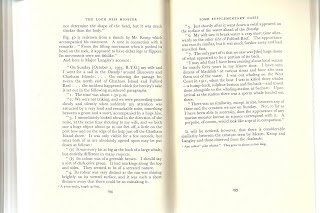 What I find interesting is they both sound like giant eels .One mentions a mane, which is often mentioned in other accounts of similar sightings and also a hissing sound. Both say it was not a whale nor any known sea creature that they saw. It, certainly from the descriptions, could not be a giant squid, which is often cited as being the cause of many sea serpent sightings, nor an oar fish as it is too thick and solid. Lets just hope what ever it was is not now extinct due to pollution or lack of food sources!
Posted by Tabitca at 02:22