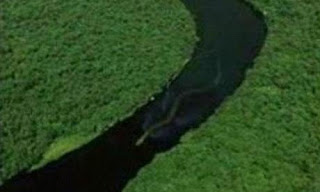 There has been a lot of controversy over the giant snake supposedly photographed in Borneo.
see:
http://www.sciam.com/blog/60-second-science/post.cfm?id=are-the-photos-of-borneos-monster-s-2009-02-20
and www.anomalist.com
The photo appears to be a fake and even though published recently the photos had been seen before on 2007.
www. cryptomundo.com has the details.

Giant snakes are not unknown. Anacondas have been reported at 30 feet long. Fossils of a huge snake were discovered fairly recently.Unfortunately it is easier to disbelieve than believe. Giant snakes are the thing we expect in Victorian adventure stories or horror movies. Much as we would love to believe this ,it is according to the photo shop experts a fake.
Posted by Tabitca at 00:42