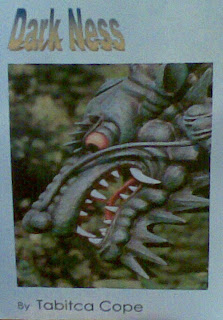 Are you prepared to face what comes from the Loch? Prepared for the unbelievable? Reviewers say they couldn’t put the book down.

“Then he saw it; huge, black, dripping pulling the model down and dragging the boat with it. As he yelled, the thing turned to look at him. Hayden swallowed and backed as far away as he could. It was the most evil looking thing he had ever seen. Its eyes were yellow and cold, bigger than dinner plates, and as it opened its mouth he saw rows of serrated teeth. It was no dinosaur, certainly not one he had ever seen in a book; it was something not quite of this world. All this raced through his head as he stood quaking before the creature. He felt something warm on his legs and realised he had wet himself in fear.”

A tale of murder, myth, monsters and a bit of magic set in modern day Loch Ness.Several university researchers meet at the Loch, all pursuing their own research. They end up banded together to help the Laird of the area and his friends fight a real enemy, but who are these men who look so alike, why do they want the laird? and is there a monster in the Loch?. The body count is rising,is the monster responsible ? In the end it all depends on a few people to save the world from an old enemy.

After the success of this book the second volume Dark Wear is now available
http://www.amazon.co.uk/Dark-Ness-Trilogy-ebook/dp/B0058DUNYW/ref=sr_1_1?ie=UTF8&qid=1321185166&sr=8-1
also available in USA, Germany and France via Amazon
Posted by Tabitca at 03:56