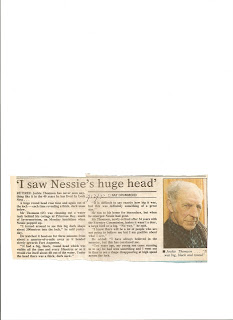 I posted this in 2009 hooping someone would have some knowledge of it.Any comments welcome.
Posted by Tabitca at 07:55

Hi Tabitca. Might be worth sharing this with Glasgow boy at his lochnessmystery blog. Love your blog, by the way. I only wish the comments sections were livelier. Come on, folks!