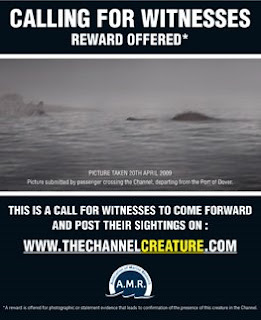 There are several reports of a large fast moving sea monster in the English Channel.

AMR ( I believe stands for Association of Marine Research) has collected a substantial number of testimonials from different areas. The strong similarities between the descriptions seem to confirm the existence of a ‘gigantic’ and extremely ‘fast-moving’ creature off our shores.

On 20th April 2009 Thierry and Sophie were walking along the Boulogne Harbour. They are both passionate about boats and sea-life and intended filming some of the boats in the habour. As Thierry was filming, he suddenly became aware of a large shape which appeared on the horizon. Intrigued, he zoomed the camera in and saw a huge, dark, rapidly moving object, which disappeared within a matter of seconds. Something of an amateur expert about the sea and marine life, he knew this was not simply the outline of a whale or any similar creature. He decided to contact the AMR who are pursuing further investigations.

Video footage sent by Pierce Clatworthy to the AMR shows a strange shadow speeding through the water, Pierce took this shot while on a cross Channel Ferry near the Normandie Bridge.
The AMR is eager to find out more about it and are hoping to receive similar footage. See footage and photos here :http://www.thechannelcreature.com/

The AMR are offering a reward I had heard for more photos and footage. So watch the footage and see if you know what it is or if you have seen it before let the AMR know. I have not come across this organisation before so cannot tell you if this is genuine or not, but go take a look and make up your own minds.

This is, very interesting, in fact all your articles are.

Thank you Ella. That is kind of you to say so. I just like finding out about new creatures.I am amazed how many unknown or un proven, if you like, cryptids there are.