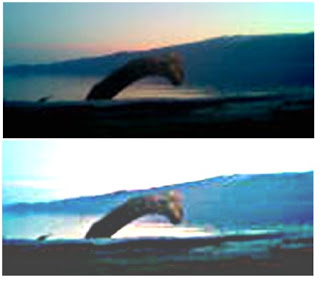 Close to Telemark, Norway, is a Lake called Seljordsvatnet. It is twelve miles long and one and a half miles wide.Like Loch Ness is was formed by glaciers during the last ice age. There have been reports of a large creature living in the lake since the 1750’s.Eyewitness reports, generally describe the creature, dubbed Selma by the locals, as a 30 to 45 foot serpent like creature.

A documented account of an encounter with the creature dates back to 1880 when Bjorn Bjorge, and his mother Gunhild, were said to have cut a creature that attacked them in half. According to the document the lower portion of the creature squirmed back into the lake while the front half was left to rot on the shore.

In the summer of 1918, Karl Karlsson walked down to the bridge at Sandnes to fish.Suddenly he saw an animal in the water. It came very close ,moving very fast and Karl Karlsson became frightened and ran away ,leaving his fishing rod.. He described the head of the animal as being like a horse. It held it’s head about three feet out of the water and then it stopped, sank straight down and disappeared.

Two years later, Eivind Fjodstuft went out to fish. When he came to the point he saw an animal on its way out of the lake.It turned back when Eivind came towards it and slipped down into the water.He described the animal as 15-20 meters long, with a head resembling the head of a crocodile. The animal was black in color and had finlike feet at the front part, right below its neck. He saw no eyes or mouth, but the animal turned its head from side to side and seemed to scout and listen. It quickly went back into the water again. In 1996, two men were fishing around dusk on Lake Seljordsvatnet when there was a sudden commotion in the water. A horse like head attached to a ten foot long neck rose from the water, the creature starred at the two fisherman from about 8 inches away before slowly submerging .In in July, 2001, an unnamed father and son from Oslo,were taking a walk down to the lake to go swimming. They were about 100 yards away when they noticed something strange on the beach. The two stopped about 30 feet from the beach as they witnessed what they could only describe as a giant snake just at the waters edge.The animal held its head towards the water unaware of their presence but as they watched the son stumbled, making a noise, and the beast turned its long neck around and stared at directly at them They described the creature’s head as like a calf. The beast swung its head back towards the lake and glided into the lake. The two described it as having an enormous body, which was at least 30 feet long, and was as thick as a car tyre.

It all began with an absolutely ordinary day of fishing on a tranquil summers day. We’d been fishing the entire afternoon. As evening arrived and the sun begin to go down we decided to head for shore for a cup of coffee. I looked back across the lake and suddenly, there it was. I managed to take a picture with my cell phone before it disappeared he told Nettavisen (this publication. Sandnes, who has a nearby farm has a very clear memory of the episode that occurred in June of 2005. We became absolutely certain that it was something strange and unusual and wondered what it could be.The creature appeared very close at hand to them. Specifically, at a distance between 20 to 50 meters, near the shore. It was summertime and still daylight and they could clearly see it.Sandnes is well-known in the area around the 48 kilometer long lake located North of Steinkjer in North Trønderlag.He says there are many stories of sightings about sea monsters in Snåsavatnet. There are certainly rumors around the area. Sjøormen is also known as – Kudulla. He believes that was the original name of Snåsavatnet. Charts indicate that the lake is around 21 meters deep (78 feet). Sandnes notes that the firm NTE detected depths there of up to 250 meters while preparing to lay cable. So it may not be surprising that there is a sea monster there, he says. Einar Johannes Sadnes has been in no hurry to share the photo of a possible sea monster, having had it in his cell phone for more than a year and a half. Now he tells Nettavisen- I was a bit afraid to tell anyone. I was afraid that no one would believe me says Sandnes.

This creature has attracted worldwide attention including that of such organizations as GUST (Global Underwater Search Team). The team set out in 2000 on a research expedition with the hopes of capturing the creature .They took along a specially designed trap which they named a “Comet”. It was a professionally built monster/eel trap. The 18-foot (6m) long tube-shaped trap, comprising a metal frame with nylon netting, was lowered into the lake . Unfortunately the team and their trap came up empty, but they did get some interesting sonar readings during the trip.

Despite over 500 reports of sightings, claimed photographs of the creature and a number of attempts to scientifically prove its existence, Selma remains a mystery.

I really think this is a mystery