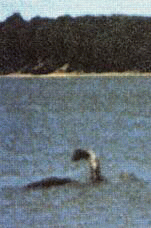 Over at cryptomundo there is breaking news from Vermont of new footage of an alleged lake monster (”Champ”?) from Lake Champlain. It includes the video. http://www.cryptomundo.com/cryptozoo-news/champ09/

There have been about 300 reported sightings of Champ over the years. The creature was depicted by Native Americans and Samuel de Champlain allegedly saw Champ in 1609. He claimed that he spotted a strange monster, some historians say it was in the St. Lawrence estuary however. Lake Champlain traverses New York, Vermont and Quebec and is 109 miles long and about 400feet deep. It was created about 10000 years ago, about the same time as Loch Ness. Most of the sightings describe the creature with a "long sinuous neck" and a body with one or more humps, 15 to 25 feet long, and dark in colour.

1819 Port Henry, NY, a railroad crew reported to have spotted a “head of an enormous serpent sticking out of the water and approaching them from the opposite shore.” Around the time of this sighting, farmers nearby claimed to have missing livestock, with drag marks leading to the shore.

In 1871: Horseshoe Bay, riders of the steamship Curlew claimed to see a head and long neck of a creature that created quite a wake.

In 1870: Charlotte, Vermont, a full steamboat of passengers spotted Champ

1873: Dresden, New York, another steamboat full spotted Champ and was reported in the local newspaper

1945: the creature was spotted by S.S. Ticonderoga in the middle of the lake

1954: A 14 inch unidentified reptile was trapped in Shelburne Bay.

1977: The Mansi photograph was taken by Sandra Mansi, a tourist from Connecticut, with her Kodak Instamatic, of what she called a dinosaur. This has become the most famous piece of evidence.

1984: Off Appletree Point, Vermont. 86 passengers aboard the Ethan Allen spotted 3 to 5 “humps” which disappeared after about 3 minutes due to the approach of a speed boat.

I also found this:

In July 1883, Sheriff Nathan H. Mooney looked off to the northwest part of New York's Lake Champlain and saw a gigantic water serpent about 50 yards away. The creature, which rose about five feet out of the water, was 25 or 30 feet in length and was close enough for the eyewitness to clearly see that there were round white spots inside it's mouth

Joseph W. Zarzynski and Jim Kennard of Rochester Engineering Laboratories have used high-tech sonar to search for Champ, and on June 3, 1979, they took readings indicating the presence of a 10 to 15 foot long moving object in the waters beneath them.

Interesting new video, though popular opinion says new video looks like an ordinary animal. Go and have a look for your selves and see what you think.