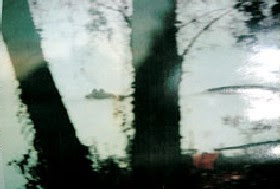 There is apparently a monster in White River in . The locals have nick named it “Whitey” and it is said to has been seen in the area for over 150 years.

W. Haden Blackman’s “The Field Guide to North American Monsters” (Three Rivers Press; 1998 ) recounts the first known sighting by the local indigenous population : “…a large, barren island that would sporadically appear within the river.…one intrepid brave stepped atop the fleshy mound and suddenly spotted a large, ponderous head rising up from the land mass. Frightened, the brave leapt into his canoe and paddled toward shore, but the thrashing monster overturned his little boat. The brave barely survived, and the ‘island’ sank into the depths.”

Then during the Civil War, the White River Monster was blamed for overturning a loaded Confederate gunship. The description of Whitey is serpent like, 30 feet long with a spiny backbone. It makes a bellowing noise and described as having a dingy gray hide.
Sightings of “Whitey” have been reported officially since 1915 but were sparse. George Mann claimed he saw the creature in 1915, and Mrs. Ethel Smith of said that she had seen the monster in 1924.

In 1937, a farmer , Bramleltte Bateman claimed to have seen the animal several times. He capitalized on the sensation and set up a viewing area where he charged a 25¢ for a chance to see the monster. ( see link to newspaper article on this, end of post)

In September 1937 Bramlett Bateman signed an affidavit describing the sighting he had made in July.

...I saw something appear on the surface of the water... [I thought] it would be about 12 feet long and 4 or 5 feet wide. I did not see either head nor tail but it slowly rose to the surface and stayed in this position some five minutes... afterward on different occasions I have seen it move up and down the river, but I never have, at any time, been able to determine the full length or size of said monster.

After Bateman's report, three other local residents signed affidavits, saying that they had seen a similar monster, including a Mr Z.B. Reid. The following statement is from Reid's affidavit:

...there was a lot of foam and bubbles coming up in a circle about 30 feet in diameter some 300 feet from where we were standing. It did not come up there but appeared about 300 feet upstream. It looked like a large sturgeon or catfish. It went down in about two minutes...

Then 1966, three people fishing also saw Whitey, describing it as having a tail like a mermaid’s, a long body, arm-like flippers and a head shaped like a monkey’s.

In 1971, two men reported that they saw three-toed tracks along the muddy river banks, as well as in the trees near the river. The tracks measured 14 inches long and 8 inches wide, and had three clawed toes. In a grassy area was a depression, as if something large had stopped . And then the sightings began again when someone reported seeing a gray creature with a horn sticking out from its forehead. Other witnesses described it as having a spiny back twenty feet long. More reports of the monster in 1971 included an anonymous witness who said: It didn't really have scales but from where I was standing it looked as if the thing was peeling all over, but it was a smooth type of skin or flesh.

Then June 28 1971 ,Cloyce Warren and two friends were fishing in a boat near the . later stated:

...This giant form rose to the surface and began moving in the middle of the river away from the boat. It was very long and gray colored... We had taken a little Polaroid Swinger with us to take pictures of the fish we caught. I grabbed the camera and managed to get a picture right before it submerged. It appeared to have a spiny backbone that stretched for 30 or more feet...

In 1973,following all the 1971 reports and sightings, the legislature signed into law a bill by state Senator Robert Harvey, creating the White River Monster Refuge along the , which would protect the monster. In August 1980, two bull sharks were found dead on the riverbank near Newport, starting conjecture about the monster possibly being a sturgeon, or oversized alligator, Roy P. Mackal draws the conclusion that the White River was home to a stranded Mirounga angustirostris, or northern elephant seal. These seals reach lengths of up to 22 feet and the male of the species have "trunks" on their snouts which may look like the "horn" reported as being seen by some witnesses. However I doubt an Elephant Seal would live for over a hundred years. They are magnificent beasts, I saw one as a child and it was enormous but looked very sad in it’s zoo home. So monster or fish or more hysteria? Perhaps it will appear again and more photos and videos may appear for scrutiny.

http://littlerock.about.com/cs/urbanlegends/a/aaghosts.htm an account of the monster and other strange stuff in the area.