From my first book in the trilogy : 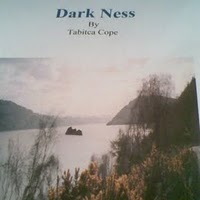 After a while, and just as Emily thought she would have to stand up and risk being
seen, as her legs were aching from crouching, the loch started to get wild. The waves nearly knocked the man off his feet but the two holding onto the ropes kept him steady.
“That explains the ropes” said Daniel to himself. He was a bit worried it might turn into a sex thing and he would have to cover Emily’s eyes. It looked like it was some sort of ritual to the Loch or maybe the water Kelpie. Some local people still upheld Celtic traditions he knew.
The loch seemed to be boiling and then a dark shape appeared. Emily had to stuff her knuckles in her mouth to stop herself from screaming as the wind whipped past them, but there was no mistaking what was coming. Daniel grabbed the two students and tried to pull them further back into the undergrowth. The wind was now so strong they struggled to move back. The thing came nearer the shore and Daniel caught sight of a huge head and a slug like body, massive, it must be over 40 feet long. He felt Andy gasp and Emily buried her face in his jacket and began to shake and sob. The man on the shore changed his incantation and the beast, the monster, turned its head from side to side as if listening or was it looking for something to eat? Daniel hoped they were hidden from those horrible cold yellow eyes, but luckily they were fixed on the three men on the shore. It seemed like time stood still to the three crouched in fear as the man continued to chant. The beast at last opened its mouth and screeched a sound that set Daniel’s teeth on edge. It was a sound like a hundred nails being drawn down a hundred blackboards. The beast then turned sending a huge spray on to the shore that even reached their hiding place and the smell from its foetid mouth still hung in the air making them gag.
Posted by Tabitca at 03:23