A modern day Basilisk in the UK?

This recent notice appeared in Durham : 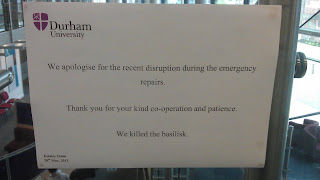 A basilisk is a legendary beast said to have been hatched by a cockerel from the egg of a serpent.One of the earliest accounts of the basilisk is in Pliny the Elder's Natural History, written in approximately 79 AD.
"There is the same power also in the serpent called the basilisk. It is produced in the province of Cyrene, being not more than twelve fingers in length. It has a white spot on the head, strongly resembling a sort of a diadem. When it hisses, all the other serpents fly from it: and it does not advance its body, like the others, by a succession of folds, but moves along upright and erect upon the middle. It destroys all shrubs, not only by its contact, but those even that it has breathed upon; it burns up all the grass too, and breaks the stones, so tremendous is its noxious influence. It was formerly a general belief that if a man on horseback killed one of these animals with a spear, the poison would run up the weapon and kill, not only the rider, but the horse as well.”

There is an account of one being killed in Warsaw in 1587:
http://blogs.smithsonianmag.com/history/2012/07/on-the-trail-of-the-warsaw-basilisk/

The nearest thing in modern Cryptozoology to the basilisk is The Crowing Crested Cobra:
http://cryptozoo-oscity.blogspot.co.uk/2010/07/crowing-crested-cobra.html

So lets be glad they vanquished it lol