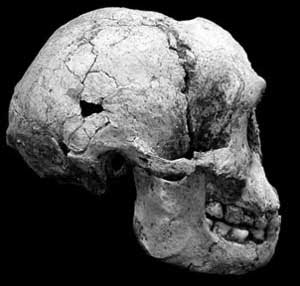 The bones of Homo floresiensis, said to be a species of dwarf human, were discovered at the Liang Bua cave on the Indonesian in 2003. Homo floresiensis was about 1 meter( 3 feet) in height and walked upright. The skull has human-like teeth with a receding forehead and no chin. Archaeological evidence suggests this species lived at Liang Bua between at least 95,000 and 13,000 years ago. They used stone tools, and hunted small mammals .The discoverers believe that floresiensis is a dwarf form of Homo erectus based on the evidence that it is not unknown for dwarf forms of large mammals to evolve on islands.

Could this species be behind the tales of fairies and “little people” that have been told for generations? From leprechauns to pixies there are tales of little people from all over the world, could these stories have started with encounters with the species Homo floresiensis? There is often some truth in folk tales and this would be an explanation for some stories, if people had encountered these little people in the past and the stories were then passed down through generations by oral history. An intriguing thought for a Sunday.

For more on the Hobbit (lots of different articles here)

Lots of different reports of little people and fairies: