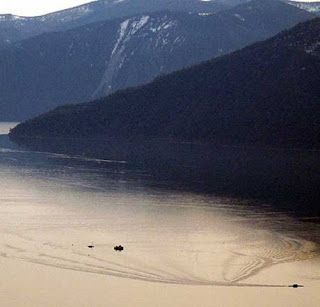 Paddler is the name of the lake creature that supposedly inhabits in . The lake is said to be 's deepest lake at almost 1200 feet and is 43miles long and just over six miles wide at it’s widest point. The creature has been described as over 20 feet long and that it moves up and down in the water as it swims(undulates).

The first sighting was said to be in 1944, however there were also rumours that the navy were testing submarines in the lake.

In the 1970’s more stories appeared about a monster in the lake .In September 1977 a young girl was reportedly attacked by a strange creature near the Sandpoint City Beach.

In 1984, an expedition to the lake by a professor , James R. McLeod, concluded that the creature was most likely to be a giant sturgeon.. While collecting testimonies McLeod noted that many people had reported seeing strange things on the lake possibly submarines.

The US Navy admitted to using the deep end of the lake for submarine research, albeit many years later . The International Submarine Engineering group (ISE) of also used the lake to test the Pisces I minisub in the 1960's.

However the story doesn’t end there:

On Memorial Day, 1985, Julie Green and her friends set out for an afternoon on the Lake In the mid afternoon sun , the teacher from Coeur d'Alene reports, a large V-shaped wave crossed about 200 yards in front of her boat. "There was clearly something in the water ahead of us that was undulating, coming in and out of the water," she recalls. Green dropped her engine and gave chase, but the gunmetal-gray object, which rivalled the length of her 22-foot boat, soon outdistanced her.

So does the paddler really exist? There was speculation it was a story put about by the navy to cover their activities. A sturgeon is of course a possibility but in such a deep lake could there be something else lurking? Maybe the navy should use a minisub to find out.

There is a book on the creature by James R. McLeod, “Mysterious and its Monster”, 1984