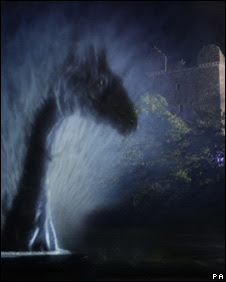 The Loch Monster has been "rebranded" by the film industry during the last decade, according to an expert on cinema. Dr David Martin-Jones, of the , said Nessie had changed from a beast feared by locals to a "family-friendly" creature. He said the 1996 film Loch Ness and 2007's The Water Horse show the monster and in a positive light. Dr Martin-Jones said the productions could be linked to growth in tourism. According to the researcher, the first British movie to cash in the myth of Nessie was 1934's The Secret of the . He said it depicted as "a stereotypical land of monster-fearing locals" yet also as a modern nation connected to by railway, road, radio, telephone, newspaper and cinema. Dr Martin-Jones, a senior lecturer at the university's department of film studies, said: "Nessie became a movie celebrity by uniting in its imagination of itself as a union of two distinct nations. "Both were joined by modernity, even whilst - by virtue of the existence of its pre-historic monster - remained primitive in comparison to its southern neighbour." But in the last decade, he said the Loch Ness Monster had gained global appeal in terms of cinema. He said: "What is so distinctive about Nessie's cinematic incarnations since the 1990s is that the kelpie has been rebranded as a welcoming, and on occasion, a family-friendly monster, who negotiates Scotland's national position globally." A kelpie, or water horse, is a shape changing creature from Scottish mythology. Nessie is one of ten genres of Scottish film examined by Dr Martin-Jones in his new book : Global Cinema. The others include comedy, Bollywood, horror, costume drama and gangster flicks. Last month, a 1936 film that claimed to show the first evidence of the monster was among rarely-seen archive footage set to be shown in . The material was shown at the Glasgow Film Theatre and the National Library of Scotland (NLS) as part of Unesco's World Day for Audiovisual Heritage. A year ago, outstanding qualities that could earn Unesco World Heritage status for Loch Ness and the Great Glen were set out - but with no mention of Nessie. Destination Loch Ness, a not-for-profit group campaigning for the designation, had secured a £25,000 sponsorship package to progress the bid. Tourism expert Prof Terry Stevens said it was important to broaden knowledge of the area beyond "the myth". Securing World Heritage status for Loch Ness and the Great Glen could generate £25m for the economy and 250 jobs within three years, according to research commissioned by DLN.
source:http://news.bbc.co.uk/1/hi/scotland/highlands_and_islands/8382986.stm
Posted by Tabitca at 02:26