Apologies I am not at all well today so am cheating some what by putting this sighting from Dec 1st on the blog instead of writing a piece.

Did witness see a panther in ?

DEVILLA Forest is the location of the latest chilling big cat sighting - with a regular dog-walker saying he will never set foot in the woods after dark again. The witness, who did not want to be identified, claims to have seen two pairs of green eyes staring at him from behind trees. The man said the eyes, reflected in a torch he was using, stalked him all the way back to his car - a distance of around 300 metres. The incident happened last Tuesday (24th November) at around 5pm near the forest entrance by the A985 Rosyth to Kincardine road. Bob Wallace (47), Fife representative of Big Cats in Britain, said, "He contacted me about a 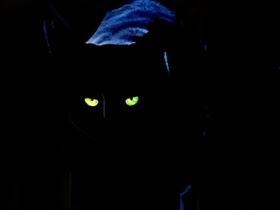 n hour later, but refused to meet me at the location that night, stating that he was never going back into the woods after dark." The man first noticed something was up when his dog began to growl and refused to go any further. Mr Wallace said, "He shined his torch around and the tree line and, at a distance of about 40 feet, saw a pair of green eyes reflected in the beam. "A few seconds later, he states that a second pair of eyes appeared slightly behind and to the left of the first pair." The man stood for a further 30-40 seconds trying to figure out what was watching him, but began to feel "freaked out" so backed off towards his car, keeping the torch on the eyes. Mr Wallace continued, "He said that although he was backing away, the eyes didn't seem to get any further away from him. In fact, he is sure that they were walking towards him and his dog."

Last month the Press reported the story of two men, James McGarry (25) and Alan Yates (18), who claim they saw a large black cat while out hunting rabbits at night last month in a Culross field. There have been around eight sightings this year in of big cats, ranging from panthers to lynx. Mr Wallace said another man had contacted him about a possible Lynx sighting near Pitfirrane golf club in September.

He was driving into Crossford at around 2am when he said he saw a large beige coloured creature run across the A994.