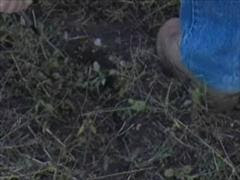 -- Experts are now investigating reported sightings of a large, hairy, 'Bigfoot-type' creature on the . Police said the 'Bigfoot-type' creature was spotted in the area around Highway 151 and 1604. A caller told police a large, tall, hairy creature dragged a deer carcass into the woods. Officers searched the area, but said they did not find anything. "If one sighting is real, then that means something is out there," said Rick Tullos, who is a member of the Gulf Coast Bigfoot Research Organization. Tullos has traveled around the country to investigate sightings and is now checking out the latest report in the area. "We look for an area where the fence has been bent down," Tullos explained. "Or maybe evidence of some hairs caught in some of the barbs of the fence." News 4 WOAI's crew looked around the area with Tullos and didn't find anything at first. But a short time later, a set of tracks was spotted that Tullos said did not look like those that would be made by a human. Tullos said he will have to analyze the tracks and, hopefully, find more evidence of what may have been in the woods. Tullos told News WOAI there have been a handful of sightings on the Far West Side, including out near Lackland Air Force Base and in other wooded areas near Highway 151 several years back.