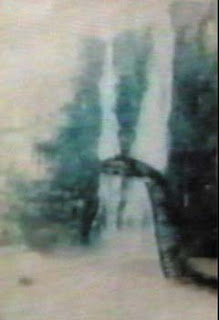 I found this in my archives and thought it might be worth investigating:

has one more attraction for ever-eager tourists: its very own monster. Zulu legend has it lurking at the bottom of the 300-foot , exerting a magical force as it sucks victims into its underwater lair. The beast, said to look just like the one in Loch Ness, is drawing sightseers to the town of in . They can see fuzzy photographs of a skinny long neck rising out of a swollen body, with three smaller `monsters' (looking suspiciously like ducks) swimming beside it. CL.

The waterfall called is approximately 95 meters in height (311 feet) and lies on the . The Zulu people called the falls KwaNogqaza, which means "Place of the Tall One". Sacred to the natives, only sangomas or traditional witch doctors can approach the lake to offer prayers to the creature .Corpses found floating in the water display body parts that have been partially consumed attributed by local superstition to Inkanyamba, the creature that lives in the falls. (Apparently it is a place often used by people to commit suicide) . In recent times sightings have been reported of a dinosaur like creature.

In 1962 at the nearby Umgeni River, a KZN Conservation Services game ranger, named Buthelezi, saw a creature with a horse-like head on the shore. When he got closer it vanished back into the river.

Johannes Hlongwane claims saw the Inkanyamba twice, once in 1971 and again in 1981. (He was the caretaker of a caravan park near Howick Falls between 1969 and 1985.). In 1981, Johannes Hlongwane was looking into the misty falls when he saw the form of a giant monster, with is neck raised about . thirty-two feet( 10 metres) into the air. He said it had a crest running along its back.

Bob Teeney claimed that in 1995 he saw a 25 feet (8 metres) giant serpent-like creature rise of the depths. He could see it’s head and neck. Bob Teeney has a fast-food shop at the falls claims to have the photographs to prove it. Fuzzy pictures of what he says is the creature rearing its head from the pool line the walls of his shop. One of the pictures, taken by a tourist, shows a pipe-like neck rising from a half-submerged swollen "body." Three smaller "monsters," which look like ducks, are swimming next to it. Teeney says the duck-like objects are baby monsters. Teeny says the monsters belong to an aquatic, snake-like dinosaur family known as the Plesiosaur.

The Inkanyamba are said by sceptics to be not a dinosaur like creature but to be a population of giant migratory, carnivorous eels, which are allegedly indigenious to southern . Anthropologist Sian Hall, who lives in Howick, says "sensation seekers" have embroidered the myth passed on by generations of Zulus in the area that a giant water snake water snake "There are no physical monsters in the ," she wrote in a newspaper article. "Giant eels, perhaps, and even huge otters, if that is your idea of a monster. We do not need to misinform the public, nor to use their gullibility to attract tourists to Howick," she said.

Richard Freeman claims it is a hoax:

Have a look at the articles and the photo…..what do you think? AS anyone who reads this blog knows I don't believe a dinosaur could have survived all these years in it's original form and would have to have evolved. Therefore it appearing excatly as it does in the text books is very unlikely.

Um, there are no giant carnivorous eels in South Africa.

Those who claim there are, either smoked some really good stuff, or like most people who don't live in South Africa, confused our little haven, SOUTH Africa, with big and scary AFRICA.... or perhaps even South AMERICA - who's Amazon jungle does have some nasty carnivorous serpents like the Anaconda.

The closest South Africa has to carnivours eels (note they are not giant though they can grow fairly large) are moray eels in KwaZulu-Natal, which are unlikely to be seen unless pursued into their small nooks ... and they'll bite those who stick a hand in after them.

That being said, I'd love to visit Howick Falls and try and spot the Inkanyamba. ;) After all, what's life without a few good mysteries?