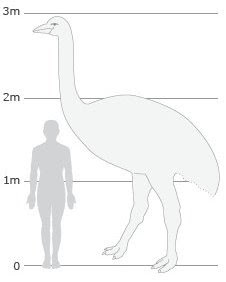 Researchers have found that eggshells of extinct bird species are a rich source of preserved DNA. An international team isolated the delicate DNA molecules of species including the massive "elephant birds" of the genus Aepyorni. The Proceedings of the Royal Society B research demonstrated the approach also on emu, ducks and the extinct moa. The team says that the technique will enable researchers to learn more about ancient birds and why they died out. "Researchers have tried unsuccessfully to isolate DNA from a fossil eggshell for years," said Charlotte Oskam at in , who authored the research. "It just turned out that they were using a method designed for bone that was not suitable for a fossil eggshell." The team has obtained DNA from the shells of a variety of species, most notably the elephant bird Aepyornis , which at half a tonne was heaviest bird to have ever existed. Aepyornis looked like an outsized ostrich, standing three metres tall; most of them died out 1,000 years ago. Archaeologist Mike Parker Pearson at the hopes that an analysis of the bird's DNA will shed more light on why the bird went extinct. The extinction coincided with humans arriving at Aepyornis's natural habitat in . The mystery, according to Professor Parker Pearson, is that there's no evidence that the bird was hunted by humans. "There's not even evidence that they ate the eggs - even though each one could make omelettes for 30 people," he told BBC News. The elephant bird may be at the root of legends about giant birds. Marco Polo claimed erroneously that these giant birds could fly. There are also tales of birds that could pick up elephants in 1001 Arabian Nights.There are complete skeletons of the elephant bird, but by analysing its DNA researchers hope to build up a more detailed picture of the creature and discover why it went extinct.
Source:http://news.bbc.co.uk/1/hi/sci/tech/8558683.stm
I hope they don't try a Jurassic park lol.


A P.S. Blogs may be sporadic for a few days . Kitten off to be spayed, daughter arriving, Mothering Sunday and new medications making me feel quite ill, so apologies in advance if you come to read the blog and there isn’t a new topic each day.