Mysterious sea and lake creatures of the Isle of Lewis

The Isle of Lewis is a place of several reports of lake and sea monsters.

The first was in 1856 and there was report in the newspapers. 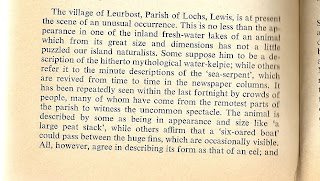 Norman Morrison a zoologist told Cyril Dieckhoff in 1941 about Searrach Uisge , a monster who was said to inhabit Loch Suainbhal. Supposedly resembling a capsized boat, this creature has been reported since 1856( and was probably the one reported in The Times ). Locals say lambs were once offered annually to the creature. Another description described it as fortyfeet ( 13 metres) long and eel like.

A sighting was reported in 1882 by a German ship off the Butt of Lewis. The ship, just off the coast, reported sighting a sea serpent around 120 feet (40 metres).long It was described as having several bumps protruding from the water, along its back. In 1895, a similar creature was seen off Bernera. This creature was supposedly 120' long( 40 metres) as well

Loch Urabhal is a body of water 2 miles north of Achmore where on 27 July 1961 a lake monster was claimed to have been seen. Ian Mc Arthur and Roderick Maciver two local teachers were fishing in the shallow end of the loch. The story goes that Maciver jumped to his feet and shouted there was something in the . There was a creature about 135 feet ( 42 meters) away .It surfaced 3 times . They described it as having a hump with a small head or possibly a fin about 6 feet( 2 metres) from the hump. It swam like a dolphin but was much bigger and undulated. It was a bright day and the loch was calm. Mc Arthur grabbed a camera but was too late as it disappeared. The lake is freshwater so it is unlikely to be a sea animal. They said it did not swim like an otter so they knew that it wasn’t a misidentification.

The mysterious Isle of Lewis has many such legends and even the mysterious disappearance of 3 lighthouse keepers. The folklore of the island is well worth reading about if you get the chance.